“This Is A Massacre”: Outrage Over Dolphin Deaths In Ceuta 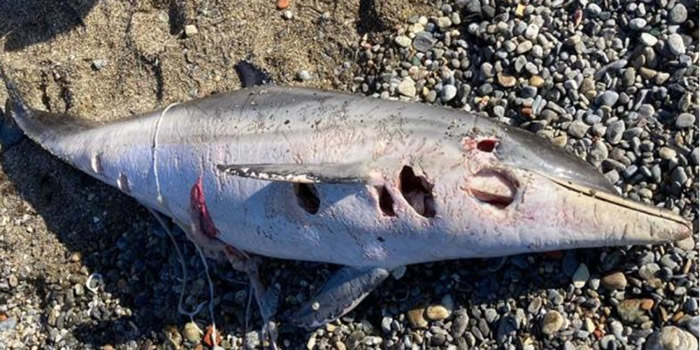 "This Is A Massacre": Outrage Over Dolphin Deaths In Ceuta. image: cecam

“THIS IS A MASSACRE”: Outrage Over Dolphin Deaths In Ceuta, as nine bodies are found

The Centre for Studies and Conservation of Marine Animals of Ceuta (CECAM) has today, Wednesday 21, reported the discovery of a striped dolphin found dead and with signs of violence, on the beach of Fuente Caballos in Ceuta.

Unfortunately, CECAM says it is not the first body, as another eight dolphins, plus a pilot whale calf were also found on Tuesday, displaying signs of amputation, with fins missing and their bodies full of holes, with Eusebio Alvarez, the secretary of CECAM telling 20minutos, “It’s a slaughter on the coast of Ceuta”.

Officers from the Guardia Civil’s Special Group of Underwater Activities (GEAS), recovered the dead creature from the sea and deposited it on the Fuente Caballos beach while waiting for Athisa to arrive, the concessionary company that deals with the management of dead animals, who would collect it and take it for further investigative tests to determine the cause of its death.

Juan Carlos Rivas, the president of CECAM, told the publication, “The dolphins appeared mutilated, with their tails cut off, hooked by the eye and with their bellies cracked. It is a crime. We have never seen this magnitude in 24 hours. Most likely, this time they met a whole herd, as there were dolphins of all sizes, males, females, pups …”.

CECAM blames the Moroccan boats that fish with drift nets off the Ceuta coast, with Rivas commenting, “they set the nets, they throw themselves all night fishing and if they hook something, so that they do not get tangled, they cut off their tails, kill them and throw them out to the sea”.

This fishing practice was banned by the United Nations in 1992, but Moroccan fishermen continued to use the method, until in 2011, Morocco banned them in exchange for aid from the EU, but it would seem that some are still fishing this way, as Rivas indicates, “they are kilometers of driftnets, they are released and they are sailing and killing everything that they catch, turtles, whales, dolphins”, indicates Rivas, as reported by 20minutos.es.