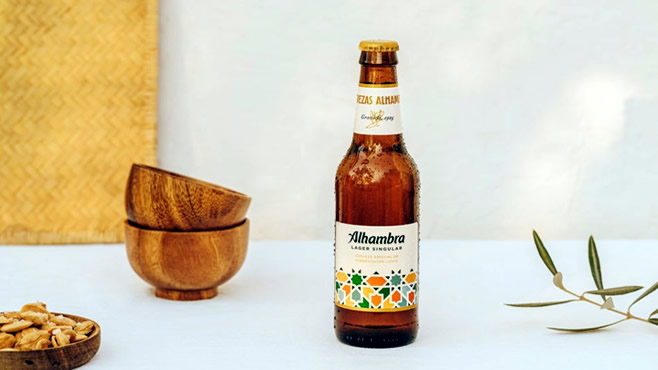 There is a new bottle of lager being produced by the iconic Alhambra brand from Granada, with that same great flavor as always, a new name, and a renewed image, called Alhambra Lager Singular, once more brewed with the true essence of this famous Andalucían city.
Its new bottle features a label with the Alhambra’s own unique latticework design, with those iconic tiles, while on the neck of the bottle is the signature of the Cervezas Alhambra brewmaster – Granada, 1925.
Alhambra lager has been brewed in the city of Granada since 1925, when the factory was opened by a Frenchman, and a Basque, Carlos Bouvard Dürr, and Antonio Knorr, who had experience in the beer brewing industry of the day, and who felt the need to create a brand with which the local population could identify.
As a result, the very first labels included views of the Alhambra Palace, crowned by two symbols of the city, a shield, and fruit, and thanks to the abundant water supply from the Acequia Aynadamar and the San Vicente springs, they would never run short of that raw ingredient, although, in the 1950s, the company started using the exceptional water that came directly from the slopes of the Sierra Nevada mountains
The very first bottles were green in colour, and had no labels, but eventually, the paper labels evolved, with Alhambra lager gaining in popularity, until, in the 1990s, the company employed brewmaster Miguel Hernáiz y Bermúdez de Castro, with his team of chemists, the result of which was the creation of Alhambra Especial and Alhambra Reserva 1925.

And now comes the launch of the latest in the brand, Alhambra Lager Singular, with a unique flavour resulting from the slow fermentation process that it goes through, to produce a light, balanced lager that has a mild bitterness, but keeping to a flavour that is instantly recognisable by the residents of Granada city, where the beer was first born, as reported by granadadigital.es.
The Euro Weekly News is running a campaign to help reunite Brits in Spain with their family and friends by capping the costs of PCR tests for travel. Please help us urge the government to cap costs at http://www.euroweeklynews.com/2021/04/16/ewn-champions-the-rights-of-brits-in-spain-to-see-loved-ones-again/