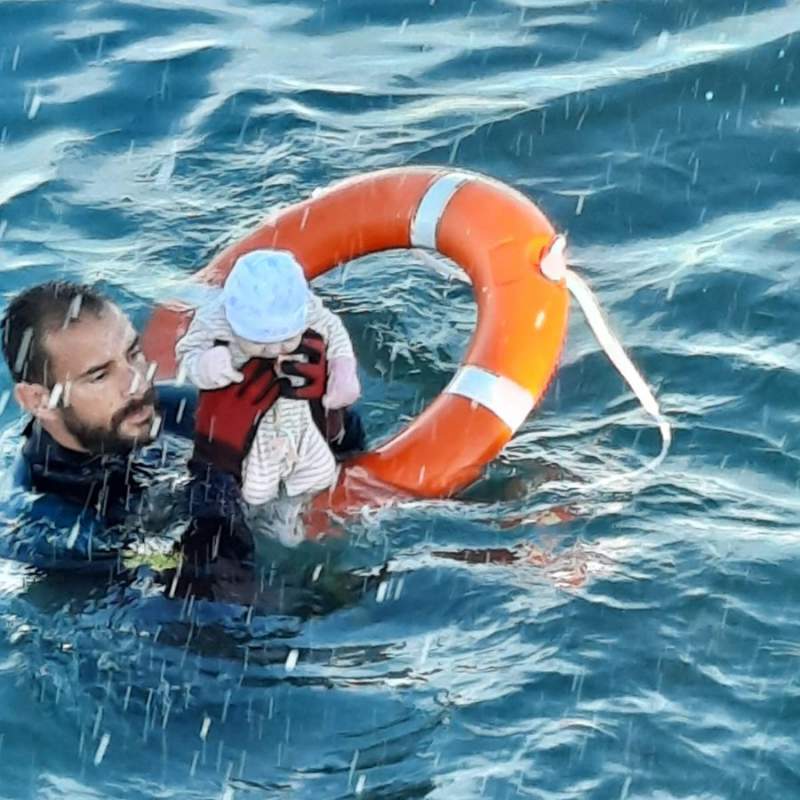 Families Desperate To Enter The Spanish Enclave Of Ceuta Throw Themselves Into The Sea Into What Is being Called A Humanitarian Crisis.

A SPANISH Guardia Civil diver has been pictured rescuing a baby from the sea off Ceuta. The family had thrown themselves into the sea in desperation to escape Morocco, hoping to make a better life for themselves in the neighbouring Spanish enclave of Ceuta.

Thousands of migrants continue to cross the border at El Tarajal, the most vulnerable point between Morocco and Ceuta. According to the Ministry of the Interior, there are already more than 8,000 people from Morocco who have crossed the border today, Tuesday, May 18.

Spanish soldiers deployed on the beach of El Tarajal, have tried to contain the massive arrival of immigrants that has brought more than 8,000 people to the Spanish enclave since Monday, May 17, but are barely enough in number to provide enough help to the foreigners that arrive exhausted at the beach border.

“We do not have figures on those that we have taken to the hospital,” says Isabel Brasero, spokesperson for the Red Cross. The emergency teams look exhausted as they walk along the shore from one end to the other of the stretch of beach that borders the perimeter gate, stopping to give water, blankets, and food to the immigrants.

Spain’s President, Pedro Sánchez suspended a trip to Paris, cancelled his schedule and travelled to Ceuta, and also to Melilla today. Spain’s Minister of Foreign Affairs asked the Moroccan ambassador for explanations after a crisis cabinet meeting was held in Moncloa, Madrid.

The migratory wave occurs amid Moroccan discontent and anger over the entry and hospitalisation in Spain of the secretary-general of the Polisario Front, Brahim Ghali, admitted weeks ago with coronavirus in a hospital in Logroño.

Tomorrow brings another dawn and it is expected another deluge of immigrants will attempt to cross into Ceuta. Emergency services and the Spanish army will be waiting for them in the hopes of avoiding a humanitarian crisis. Please check tomorrow for updates.