MIC’s Louise Thompson is pregnant with her first child 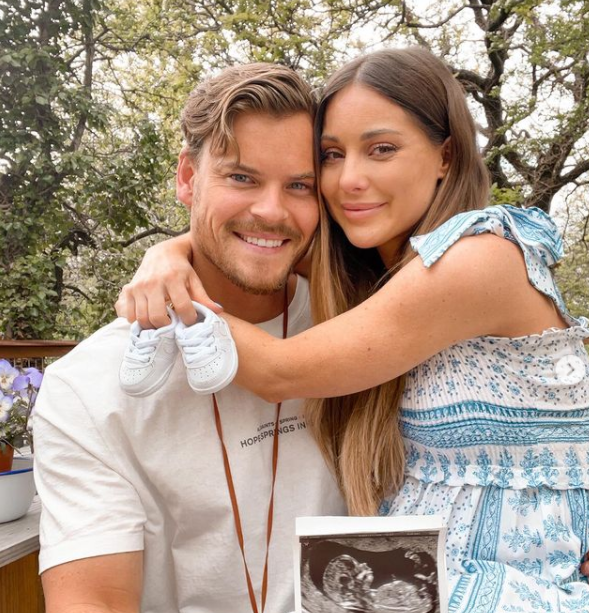 MIC’s Louise Thompson is pregnant with her first child.

MIC’s Louise Thompson and her fiancé Ryan Libbey are expecting a baby.

On Tuesday, the former Made in Chelsea star, 31, announced she had hit the 12-week mark of her pregnancy in a heartfelt announcement.

Following a miscarriage earlier this year, Louise told her followers that the journey so far has been “challenging.”

Louise spoke about how she’s been feeling after finding out she’s pregnant for the second time, admitting she was worried history might repeat itself.

Louise also posted photos of herself and Ryan carrying a baby scan and a pair of tiny white trainers alongside the candid passage.

Beside the tearful snaps, the fitness guru, wrote: ‘Counting our blessings. I thought I’d have all sorts of creative ways to deliver this information but the truth is the last 12 weeks have been quite challenging.

‘Unlike last time, Ryan and I haven’t documented our journey at all. I’ve hardly taken any pictures or videos for fear that something might happen. I’ve also felt like ASS.

‘I never knew that fatigue or ‘flatness’ like this existed in pregnancy. There are 0 before and after snaps, no week to week transformations or fun reveal videos with friends and family leading a trail of buns to an oven, instead there is a drawer filled with 10000000x billion gazillion pregnancy tests (shameless and expensive) and some sensitive conversations where we try not to get too excited.

‘I’d be lying if I said it’s been an easy ride but the truth is I think poor Ryan has found it even harder than I have.

‘I’m definitely lucky to have such a sensitive partner and I feel safe in the knowledge that you are going to be the best dad in the world.

‘Now we’ve reached this hopeful milestone. I am really pleased to be able to share our lovely news with you all.

‘I want to try to relax a smidge and to be able to enjoy the journey as I’m informed it will be over in a flash.

‘The truth is I might have waited a little longer to share but I don’t think I could have hidden the news for much longer because there is absolutely ZERO room left in this 5ft short torso for a growing bump except to push MASSIVELY outwards which means it’s becoming very hard to hide… I’ve already received a few comments.

‘I already resemble a wide load vehicle (Ryan’s words not mine and incidentally exactly the kind of humour I need to get me through the next six months).

‘Now that it’s out in the open I’d love to be able to ask for your advice when I need it as there are so many things happening to my body that NO ONE TALKS ABOUT.

‘Hormones are a thing of absolute madness and pregnancy coupled with ulcerative colitis has been a major killjoy and particularly anxiety inducing.

‘Who’s experienced it? I’ve always been a firm believer that women are superhuman for what they put up with and now I have even more reason to stand by that. L&R ❤️’

Underneath the caption of her post, Louise added a further comment and assured fans she didn’t want to appear ‘negative’ and also wanted to remain ‘sensitive’ to those still on their fertility journey.

She said: ‘Despite feeling a bit all over the place mentally and physically, I don’t want to come across as negative, I feel an immense sense of gratitude for this gift and I want to remain sensitive to those that are still on their fertility journey.’