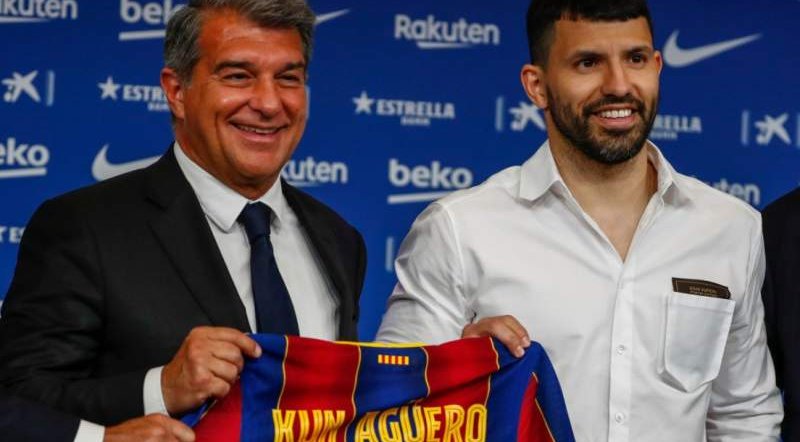 Sergio Aguero today, Monday, May 31, finally signed a two-year contract at the Nou Camp, with La Liga Santander giants Barcelona, completing his move from Premier League champions Manchester City, although his move will not be official until July 1, when his contract at the Etihad expires.

After completing a medical at the Catalan club, and then putting pen to paper, the 32-year-old Argentinian striker was unveiled to the waiting Spanish press, resplendent in his Barcelona kit, and news on the move is that it was a free transfer, and Barca have put a €100m (£86m) buyout clause in the contract, according to Sky Sports.

Aguero had originally played in Spain back in 2011 for Atletico Madrid, before spending ten glorious years with Man City, where he won five league titles, six league cups, and one FA Cup, as well as becoming the club’s record goalscorer.

Now he will begin a new era in Catalonia, and told the press, “We all know that Barcelona is the best club in the world so I think I made a great decision to be here and I hope to help the team. Of course, it is a step forward in my career and hopefully, I can help the team win things. I want to play and help this squad, and if the team does it well, I will be happy individually”.

He continued, “I want to send a big hug to everyone, to all the supporters I will try to give my best and hopefully the fans will enjoy my skills. They enjoyed me in other shirts but now I am here. I have changed a little bit. When I arrived in Europe at Atletico Madrid at 18 years old, I learned a lot, then I played for Manchester City in the Premier League”.

Adding, “Now I have changed my way of playing, but I have an idea of where I can play and I will try to help my teammates with my experience”.