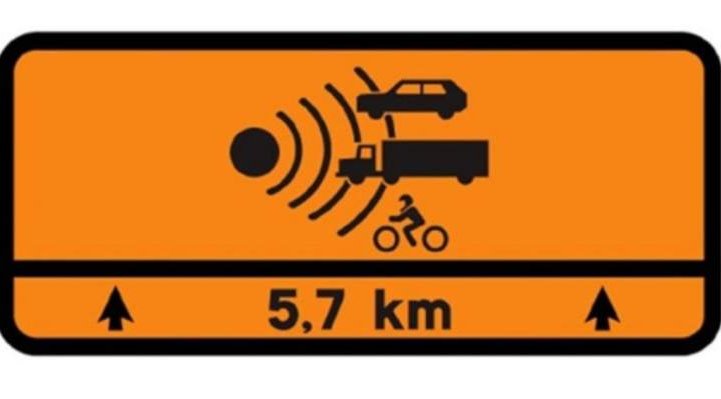 Since March of this year, you might have noticed new orange-coloured signs going up on the network of roads around Spain, in fact, to be precise, more than 300 of them have already been fixed in place around the country by the Directorate General of Traffic (DGT), but, many people have reported being confused as to the exact meaning behind these signs.

Explaining the new signs, on the upper segment it shows the classic roadsign symbol of a black coloured radar device emitting waves towards a car, lorry, and motorcycle, which usually means there is a radar device coming up, then in the lower segment, there is a distance and two forward-arrows shown.

Most drivers are of the belief that this means there is a radar installed at the specific distance depicted in the sign, as with the example of the photo below that says 5.7km, but it is done to comply with the maxim of the DGT of signaling all the fixed controls on the road.

Although our logic would tell us that the sign means a radar is 5.7km ahead, that is not the case, and what the DGT sign is really telling drivers is that firstly, they are approaching a section of road – in this example, a 5.7km stretch of road – that has a high risk of accidents, and as such, there is the high possibility that a mobile radar will be in use, to encourage drivers to slow down for the next 5.7km.

In the words of the DGT, “If you see this sign, it means that it is a dangerous section in which excess speed is specially monitored for the length of the section indicated”, in other words, there is a high probability that a mobile radar could be anywhere within 5.7km of the sign, as the DGT continues to aim at reducing the number of accidents on the roads, as reported by laopiniondemalaga.es.