Marbella Celebrates The Day Of Its Patron Saint San Bernabé 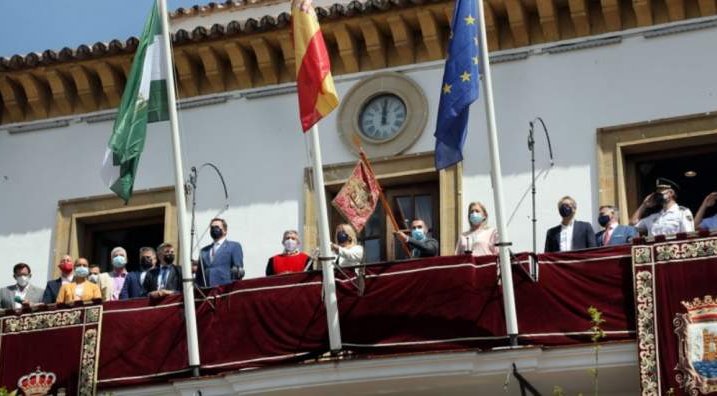 MARBELLA Celebrates The Day Of Its Patron Saint San Bernabé

Ángeles Muñoz chaired the annual raising of the flags on the balcony of Mabella City Hall, yesterday, Thursday 10, in preparation for the Great Day of Marbella, in memory of its patron saint, San Bernabé, which will be commemorated today Friday 11.
The event was also attended by the other councillors from Marbella City Hall, including Enrique Rodríguez, who is the youngest member of the City Council, who was bestowed the great honour of waving the municipal emblem from the balcony.
Ms Muñoz said, “It is one of the appointments that we have been able to celebrate without compromising security due to the influx of people”, pointing out that it is “very symbolic that one day before the feast of our Patron we place the Banner on the town hall balcony and also accompanied by our queens and ladies, as well as the flamenco fashion models and designers who are also starring this week”.
As the mayor added, “Without a doubt, we are in an edition marked by responsibility due to the pandemic, although we cannot forget to enjoy and live these days, but, with caution, because we must continue to be aware that the health crisis has not yet been overcome”.
Enrique Rodríguez expressed his “pride as a marbellero and a resident of the city, to be able to carry the relic”, while stressing that this edition is being held “with a little more normality compared to last year and we trust that 2022 will be held with the pandemic over”.
Friday’s celebration in honour of San Bernabé will start with the celebration of the solemn mass in the Church of the Incarnation, and later on, the civic-religious procession will take place, to the Cruz del Humilladero.
For the children to enjoy,  there will also be the Magic Park installed in La Represa on the weekend of June 12 and 13, an activity for which it is necessary to request an appointment in the municipal delegation of Fiestas.
Marbella celebrates with its annual fair normally at the time of San Bernabé Day, which is June 11, and is always a local holiday in the city, with the fair taking place during the first or second week of June depending on where the 11th falls and how the Town Hall thinks it best fits with all the festivities, but of course, with the pandemic, it has not been possible to stage the usual festivities this year.
According to history, Marbella adopted San Bernabé (St Bernard) as their patron saint centuries ago, a man born with the name Joseph, but the apostles awarded him the name of San Bernabé after his generous act of giving money to the poor. The name stands for “Son of Exhortation” or “he who makes an effort” or “he who encourages others”.