Malaga CF reveal their new football strips for this season 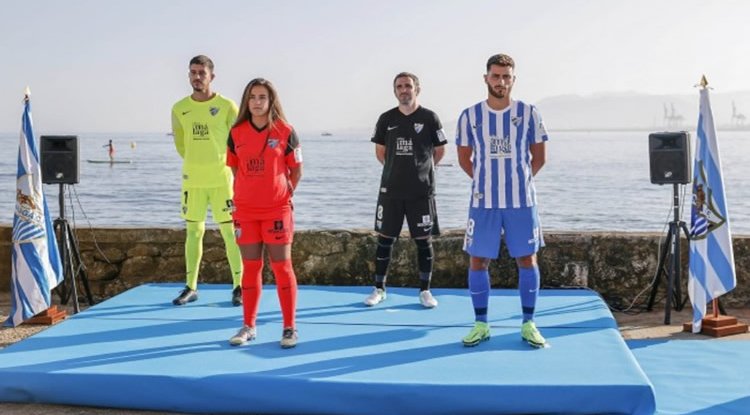 Malaga football club already has its three new official strips for the upcoming 2021-22 season – which begins in almost one months time – and they were revealed for the cameras of 101TV on Thursday 15, in a presentation that took place at El Balneario, in the Baños del Carmen, with the bay of Malaga as a backdrop, a special, symbolic setting for the Club, as before the inauguration of La Rosaleda, this was the location where matches were held, some 80 years ago.
Modelling the La Rosaleda team’s new football kits – all emblazoned with the logo of their new sponsor, Sabor a Malaga, on an improvised catwalk – as firstly, the main home strip was shown, courtesy of Luis Muñoz, a kit with the familiar vertical royal blue stripes and a classic cut, a retro touch, that evokes the golden age of the Malaga team of the late 1990s and early 2000s.
The second strip, for away matches, was modelled by Marina Galvez, and was the one that raised the most eyebrows, with the club not wishing to say what the actual colour was called, was it Crimson, Diva Pink, Orange or Coral, nobody could say, but it is definitely a very eye-catching colour, and then, goalkeeper, Dani Barrio, also unveiled the luminous all-yellow strip to be worn for the 2021-22 season.
For the third Malaguista strip, shown by Pablo Sanchez, well, black is always a good choice for a kit, as it looks elegant, classic, it never fails, and is the shirt which the players will wear as a third alternative in matches this season, but, it is the only one of the three that will not be available as club merchandise, only the first two strips are going to be available for fans to purchase from the MCF Stores, once there is sufficient stock to cover demand, which will be revealed by the club’s official media channels as soon as possible, as reported by 101tv.es, and malagacf.com.