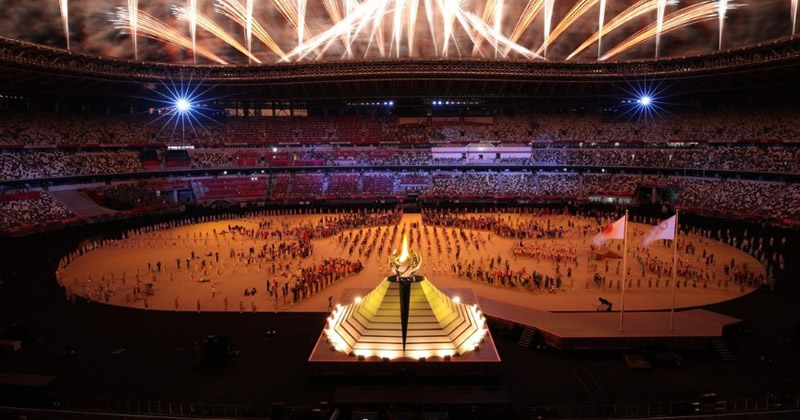 Japan’s 23-year-old four-time tennis Grand Slam champion, Naomi Osaka, was today, Friday, July 23, bestowed the honour of lighting the symbolic Olympic torch, a beacon of hope, to declare the 2020 Tokyo Olympic Games open, after she took the torch that had been passed between 14 other athletes, and finally ascended the iconic Mount Fuji – lighting the flame that will burn for the rest of the Games – as fireworks suddenly lit up the night sky of Tokyo.

This opening ceremony was not expected to have the glitz and carnival atmosphere or previous ones, due to the coronavirus restrictions that are in place, but even though there was a more sombre mood, there was certainly a multitude of colours as the teams did the traditional parade.

As always, each country appeared, with team members waving its flag at the head of the procession, waving to the 68,000-seater stands that were empty, apart from a few officials, including US First Lady Dr Jill Biden and French president Emmanuel Macron.

Thomas Bach, the president of the International Olympic Committee (IOC), said, “Today is a moment of hope. Yes, it is very different from what all of us had imagined. But let us cherish this moment because finally, we are all here together”.

This will be the first Games to ever take place behind closed doors, and will definitely create a peculiar surrounding for the athletes as they compete, but the desire to win those coveted gold, silver, or bronze medals is bound to inspire them.

A couple of scandals that occurred just prior to the opening was the last thing they needed, but, on the eve of the ceremony, the director of the games was fired after he had made what he claims were only jokes, about the Holocaust, and a few days earlier, the composer resigned after it came to light that he had bullied school classmates who had disabilities.

Moe Sbihi and Hannah Mills led the 22-strong Team GB out, waving the flag passionately, while outside the stadium, protesters had gathered, and could be heard chanting “stop the Olympics”, but, Seiko Hashimoto, the Tokyo 2020 president showed the resilience of the organisers, as he said, “Here is a vision for the future, one that embodies ‘unity in diversity’, one of peace and respect for one another. This is the power of sport, and an expression of the fundamental values of the Olympic movement. This is its essence”.