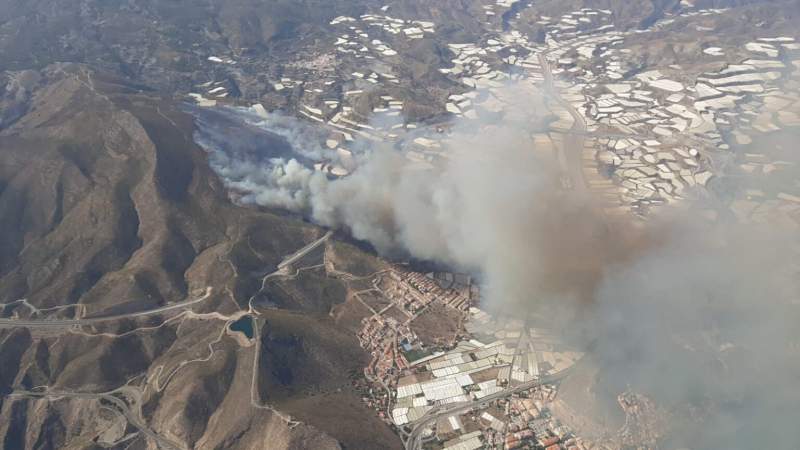 Firefighters Helicopters and 4 aeroplanes are tackling a fierce blaze that broke out in the municipality of Gualchos-Castell de Ferro, Granada.
Infoca has deployed 50 specialist forest firefighters, 4 helicopters and 4 aeroplanes this afternoon to put out a fire that broke out at around 4.30 pm today, Saturday, August 28, and is thought to have originated in the area of ​​Pico del Águila.

There are four helicopters working on firefighting tasks. Two of them are very heavy, large aircraft, a Kamov and a Superpuma, which can carry between 3,500 and 5,000 litres of water. The other two helicopters are lighter and are capable of carrying about a thousand litres of water.

The superpuma helicopter has come from the fire reinforcement brigades (Brica) of Jérez del Marquesado, in Los Moralillos. The Kamov helicopter comes from the forest defence centres (Cedefo) based in La Resinera, in Granada.

Also involved in the effort are three cargo planes that have been deployed on the ground. Two of them come from the slopes of the Granada town of Hernán Valle and the other has come from the Almeria town of Gérgal.

The Infoca (fire prevention plan to preserve nature in Andalucia) surveillance plane stationed at Granada airport has been used to survey the area, flying over the fire to organise and execute a plan to extinguish the fire.

Fire checkpoints have been deployed on the ground, made up of fifty people, including forest firefighters and environmental agents. At the scene of the fire there are also two operations technicians. A fire truck has also moved closer to the centre of the blaze.

This entire operation is due to the fact that Pablo García, the delegate of the Junta de Andaucía in Granada, activated Level 1 of the Forest Fire Emergency Plan at 5:50 p.m.

The fire is still blazing but is being fought back by the emergency services who are confident it will be extinguished before midnight.