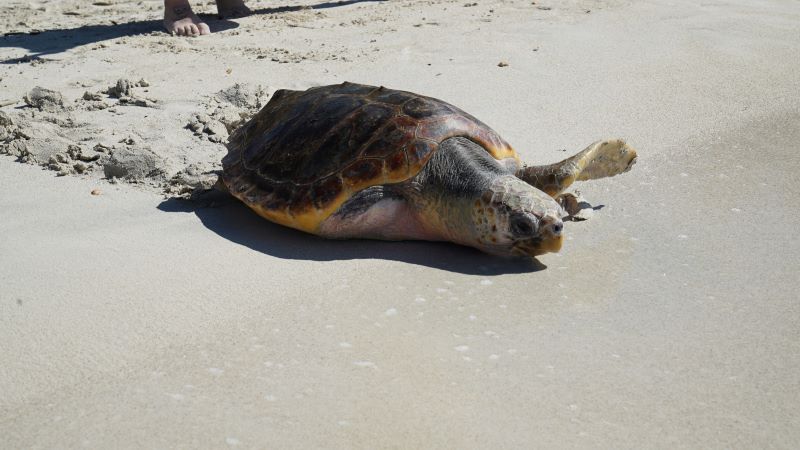 Conservation organisations in Mallorca worried about injured turtles have issued a reminder about the rules concerning their discovery and handling.
Indeed, the Balearic Ministry of the Environment in conjunction with the Consortium for the Recovery of the Fauna of the Balearic Islands (COFIB) and the Palma Aquarium Foundation has issued a long statement about the need to ensure injuries to sea turtles are reported via 112.
Only four of the nine specimens of loggerhead turtles (Caretta caretta) sighted entangled in plastic in July and August in the Balearic Islands were treated by the competent authorities because they have not been properly advised of the problems.
The COFIB and the Palma Aquarium Foundation (which is in charge of recovering the specimens rescued due to an agreement signed in 2014) have been informed of the other sightings through social networks.
In some of these posts, it has been possible to see how some people have proceeded to untangle and release the turtle and although the Ministry of the Environment and Territory is grateful for the good will and sensitivity towards the survival of this species it warns that acting without veterinary advice can endanger the life of the animal.
The marine wildlife rescue protocol states that any sighting of a protected species in distress must be reported to 112, which is responsible for transferring the notice to the competent authority.
In the case of sea turtles, it is appropriate to rescue the specimen so that it can be attended to by technicians authorised by the ministry, but in no case should an attempt be made to untangle the turtle.
In many cases, the entanglement causes infections in the fins that can spread throughout the body, posing danger, if the piece of plastic that hinders circulation is not removed by a professional.
So far this year, 27 turtles have been treated in Mallorca, 4 in Menorca, 4 in Ibiza and 1 in Formentera and in addition, a dead green turtle (Chelonia mydas) was recorded in Mallorca.
Thank you for reading ‘Conservation organisations in Mallorca worried about injured turtles’ and remember that all articles produced by Euro Weekly News may be accessed free of charge.