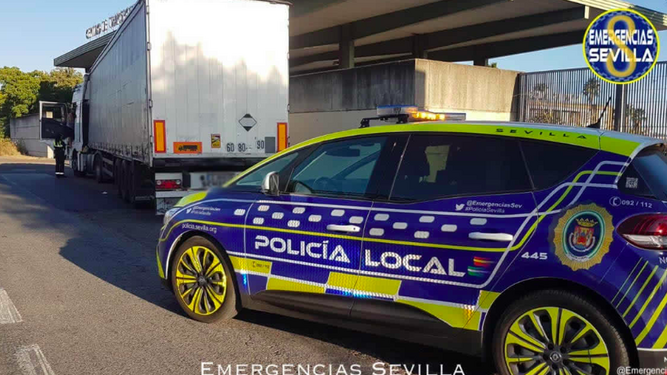 Police in Sevilla impound 'totally illegal' lorry from Bulgaria that got stuck in a one way street. Image: Emergencias Sevilla

Police in Sevilla were stunned as a lorry from Bulgaria, driven by an Albanian with an expired Greek driver’s license, got jammed in a tight one-way street!

Local Police in Sevilla impounded a lorry that had travelled 6,000 kilometres on an international route from Bulgaria to Spain after detecting that it had more than a few irregularities.

Police found that the ITV had expired, along with the insurance. The driver, of Albanian origin, was also carrying a Greek license- in someones else’s name- that had also expired!

The vehicle was trapped between the streets of Castillo de las Guardas and Bollullos in Padre Pío, the driver explained to Police when he arrived into the city that he had followed the directions of the GPS accurately.

Emergencies Sevilla said that at around 19:00 several calls to 092 from residents in the area of Padre Pio alerted the presence of a large truck that was blocked inside a tightly packed street. Several members of the Local Police had already arrived at the scene and were soon able to verify that it was a 57-ton trailer from Bulgaria.

The driver explained to the officers that, “when following the GPS indications, he entered the interior of Padre Pío and soon got blocked by the dimensions of the vehicle. Thanks to the collaboration of the neighbours who removed the parked vehicles, it was possible to resolve the blockage by moving the vehicle out eventually.

Police verified that it was “a driver of Albanian nationality, presenting a Greek driving license and driving a 57-ton Bulgarian trailer”.

“According to what he said, he has been making an international route from his country of origin, passing through Greece and Italy until arriving in Spain. In Spain he drove through Barcelona to Cadiz and then to Sevilla on his return route”, said a police spokesman.

Police immediately impounded the vehicle- for a list of infractions!

The driver had an expired Greek driving license, the tractor unit had an expired ITV, and no insurance. The tachograph revision was also expired, with “illegible discs and anomalies”. During a road test, officers also found that the tachograph was faulty.