Elias Bendodo hopes to convince remaining 780,000 Andalucians to get vaccinated. 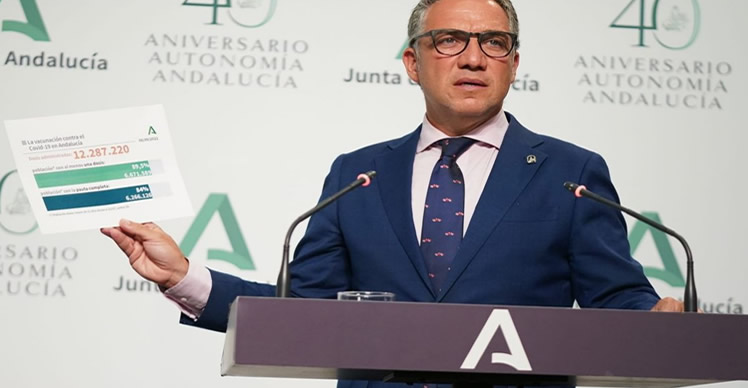 ELIAS BENDODO, the spokesman for the Andalucian Government is hoping that the remaining 780,000 Andalucians can be convinced to get vaccinated

Nine months, and more than 12 million doses later, Andalucia is now close to having 90 per cent of the target population – of people over 12 years of age – jabbed with at least one dose of Covid-19.
Out of a total of 6,671,529 Andalucians over the age of 12, 89.5 per cent are on the first dose, and almost 84.1 per cent have completed the regimen, while in the case of the province of Malaga, 84.5 per cent of the target population has at least one dose, and 79.5 per cent have already been inoculated twice.
Elias Bendodo, the Minister of the Presidency, and spokesman for the Andalucian Government has taken these figures to heart after the meeting of the Governing Council, and stressed that Andalucia is “the community that is providing the most vaccines”, and has defined this vaccination coverage and the rate of inoculations in the community as “the main reason for the victory”, in reference to the decrease in the number of infections that the region has experienced in recent weeks.
“Hospital pressure has been reduced, and the health system has held up well. We are already in the descent of the fifth wave curve,” celebrated the spokesman, who reported that the percentage of ICU beds occupied by patients with Covid-19 stands at 9.8 per cent, and Andalucian hospitals still have 797 patients admitted, with 182 in Intensive Care Units (ICU).
“This significant drop cannot allow us to be complacent for a second, and that is why we have to remain permanently on our guard, analysing the data on a daily basis”, warned Bendodo.
With these data, the Junta has set itself a “new challenge” of convincing the almost 780,000 Andalucians over the age of 12 who have not yet had any vaccinations to do so, and to facilitate this, has deployed 138 vaccination points without appointment throughout the eight provinces.
Bendodo also announced the launch of information and awareness campaigns, and requested the support of parents and teachers to encourage pending inoculations, as, in the majority, they are young people aged between 12 and 19 years, although the government has stated that this strategy has already managed to vaccinate another 100,000 Andalucians who had not yet made up their minds.
“Between all of us, we have to convince these people that the most effective tool is vaccination,” the minister said, “It doesn’t even reach 10 per cent of the population, but we want that percentage to be even smaller”, as reported by laopiniondemalaga.es.