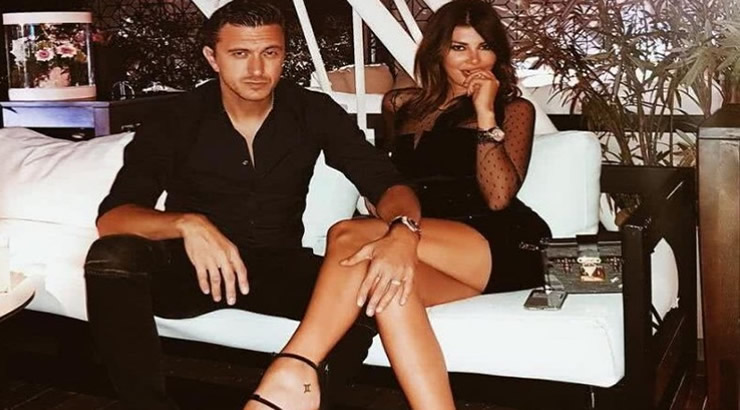 WATCH: New video footage has materialised of the ‘illegal’ arrest of film producer Dragos Savulescu, recorded in the police car by his wife Angela Martini

Dramatic video footage released today by entrepreneur and movie producer Dragos Savulescu and his wife Angela Martini shows the moment he says he was “illegally” arrested on the island of Mykonos.

Filmed while the couple were inside a speeding police car, former Miss Universe Angela Martini can be heard in the video screaming “why the f*** are we driving like this?” as a cavalcade of police vehicles, lights and sirens blaring, race through the streets.

Still shaken by their ordeal, the celebrity couple announced today they plan to sue authorities in Romania over the arrest by up to 30 officers on August 8. Greek police were responding to a Romanian extradition order issued by the Court of Appeal in Bucharest, which last week the Aegean Court of Appeal in Syros Greece ruled was without merit and allowed them to return home to Italy.

Speaking today, from their home in Milan, Mr Savulescu, 47, said; “We should never have been put through this. What the Romanian authorities did was terrifying and completely illegal. Romania had no right to order my arrest because they have known since June that the execution of my case has already started in Italy and, according to law, this removes the power of Romania to arrest me. They lied to the police in Greece about this, claiming – wrongly – I had not yet started the execution of my penalty. The blame for this lies completely with the authorities in Romania”.

Of their decision to sue the Romanian authorities for damages, he added, “We have been hunted and maligned by Romania for nearly 16 years for a crime I did not commit. Besides the fact that I’ve lost money and time because of the whole situation, it has affected our
health, our image, our business, and our life. We will be asking for serious damages. Moreover, it’s a matter of principle because we cannot let an abusive state destroy us like this. We also need to encourage others to do the same because we are not the only victims of this state, there are many, many others”.

Videos released by the couple today capture the evening of the arrest at a beachfront restaurant in Mykonos, where they had gone to dinner with friends. The first – shot just 30 minutes before the arrest – shows Ms Martini playfully posing for her husband during a romantic walk in Mykonos, blissfully unaware that police were preparing to swoop.

The second shows Mr Savulescu and his terrified wife being driven at speed to the police station in Syros, flanked by three officers in the car and followed by other police cars and motorcycles. Amid the chaos, Ms Martini can be heard reassuring her husband that she had already called their lawyers.

Afterwards, Mr Savulescu spent two days under arrest before being released, pending a court hearing that took place last Wednesday. Even though he held documents from Italy that showed he was able to travel freely, the action by the Romanian authorities meant he was compelled to stay on the island until last week, living in rented accommodation.

He claims that Romania put pressure on the Greek police to make the arrest, even though the Romanian extradition order was defunct having already been dismissed in Italy in 2019. Interpol had also applied provisional measures to Mr Savulescu’s file, effectively removing access to it, he said.

Speaking about the original charges in Romania, related to a 2005 land restitution case, in which he was sentenced in 2019 to 5 years and 6 months, Mr Savulescu added, “I strenuously claim my innocence and my conviction was profoundly unlawful”.

As a resident of Italy since 2017, Mr Savulescu successfully applied for his case to be legally recognised In Italy, and in September last year the Naples Court of Appeal later granted an amnesty to the sentence under Italian law.