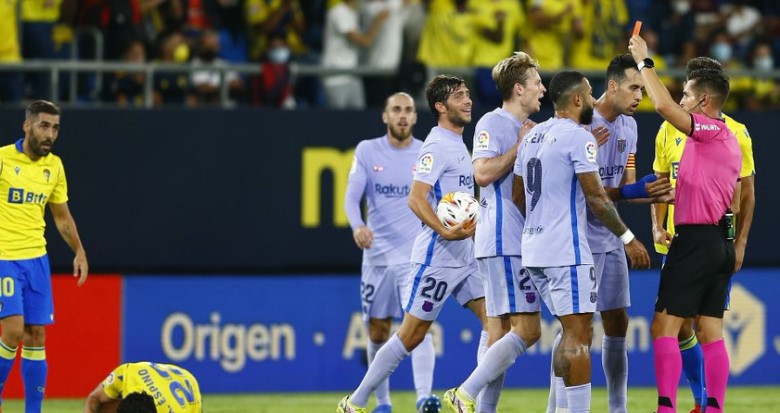 Red Cards for Koeman and De Jong as Barcelona are embarrassed in Cadiz. image: twitter

Ronald Koeman saw his problems get worse as he picked up a red card in the dying minutes of an embarrassing goalless draw this evening, Thursday, September 23, with Cadiz, and that is not a disparaging remark about the Andalucian club, as they could so easily have taken all three points from the Catalan giants if goalkeeper Marc-Andre ter Stegen had not been on such top form.

This result now means Barca have won just two matches this season in LaLiga, and they are lying in a very unusual seventh position in the table, with Koeman’s job allegedly only on hold until the club managed to find his replacement, possibly extra stress that led to the 58-year-old receiving a red card for dissent in the dying seconds of the match, after Sergio Busquets had been booked.

His side had already been reduced to ten men in the 65th minute when Frenkie de Jong was shown what seemed a pretty harsh second yellow, although both yellow cards were just four minutes apart.

Barcelona’s saviour was Ter Stegen who pulled off great saves to deny Alvaro Negredo, Salvi Sanchez, and Anthony Lozano, otherwise there would have been a very different scoreline, as on a bad night, even Dutch hitman Memphis Depay misfired and could not score from six yards out, one of a few chances he failed to convert.

This Barca team seem ready for a scrap but just lack some overall quality, plus of course, they are still missing some of their big names through injury, with Koeman telling the LaLiga television cameras after the match, “One of the problems is in Spain they send you off for nothing”.

Adding, “They don’t say why, they just say attitude. Everyone saw the moment there was a second ball on the pitch. Everyone has to see that. I am strong of course. I can’t win the battle with the press. I will put my energy into the team, and with the players. I still see the fantastic attitude of the players, and for me, that is most important. I can’t stop what the press is writing. We have to continue, that is my job”, as reported by bbc.com.