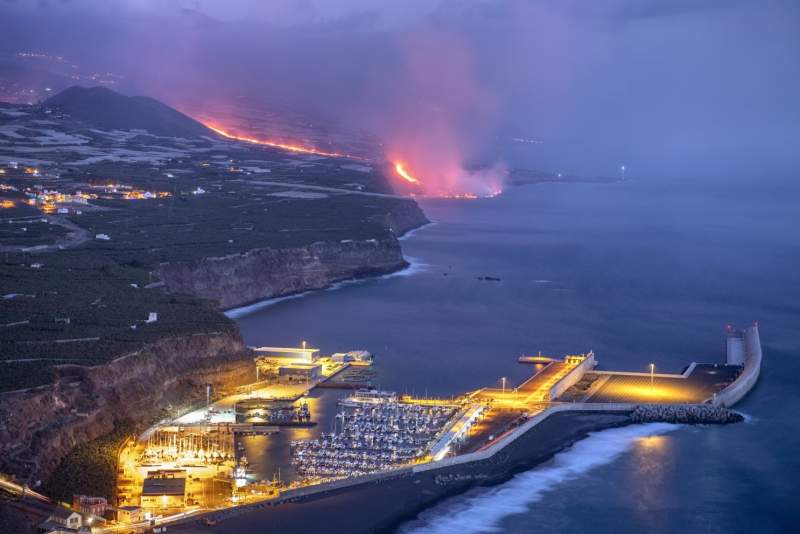 The La Palma volcano lava has started to emit toxic gas as it enters the sea, turning into glass underwater.

The interaction between the lava and the sea of ​​La Palma is generating more than great columns of smoke, now adding toxic gas to the mix. Underwater, the enormous collective mass, with its large thermal difference, is also altering the nature and shape of the coastal area itself.

The first thing that happens when lava at more than 800 ° (it has lost about 200 ° on the way since it left the Cumbre Vieja volcano) mixes with seawater at around 24 ° is that the lava fragments (breaks up) violently and suddenly.

However, and contrary to popular belief, is that it does not explode outwards as what is produced are mostly implosions- into the substance itself. Thermal contrast (the difference in temperature) causes much of the material most exposed to water to break up and detach, these are called hydroclasts, (chilled glass particles formed by lava–water interactions) and a submersive version of pyroclasts, (Pyroclastic rocks are rocks composed of rock fragments produced and ejected by explosive volcanic eruptions.).

The process remains active as long as new material continues to arrive from the volcano- a process so fast that liquid rock solidifies without even crystallizing.

Geologists believe that some of the changes will be short-lived, but it is feared that others will last for thousands of years. The most immediate and characteristic phenomenon is being the vitrification of the red-hot magma flow.

Despite the enormous technical and scientific resources deployed on land, sea and air, what is happening underwater is so far not been studied as thoroughly.

The Spanish Institute of Oceanography, currently operating from the Ramón Margalef vessel, has not yet deployed underwater cameras, nor has it brought its unmanned submarine to the island, it is presumed that as the volcanic activity decreases then these high-tech surveillance devices will be put into action.

A new eruptive mouth opened at the Cumbre Vieja volcano on La Palma, this morning, Sunday, October 3, forcing the evacuation of surrounding areas. However, the President of the Canary Islands, Angel Victor Torres Perez, said that so far there had been no casualties.

Despite previous forecasts, the lava is advancing slower than initially anticipated and didn’t reach the ocean on Monday night, regional emergency officials said. Over 5,500 people have been evacuated, and hundreds of houses have been affected, authorities reported.