Empty shelves as Tesco and Sainsbury’s run out of pasta 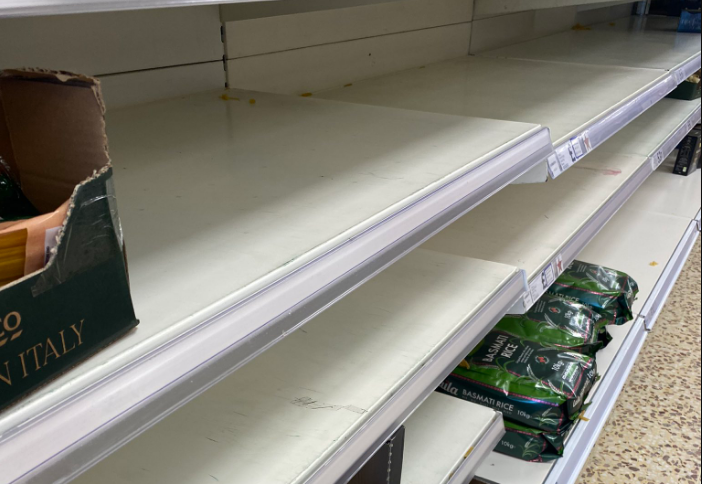 Empty shelves as Tesco and Sainsbury's run out of Pasta. Image - Twitter

Shoppers are complaining as supermarkets Tesco and Sainsbury’s run out of pasta.

Shoppers are complaining as supermarkets Tesco and Sainsbury’s run out of pasta after a food expert warned of shortages due to a poor wheat harvest.

The current HGV driver crisis is also making the situation worse and affecting supply chains across the UK. He said.

The price of wheat increased by about 90 per cent this summer following a drought and high temperatures hitting supplier farms in Canada.

Most of the durum wheat is produced at these farms and ground into semolina to make spaghetti, penne and macaroni in Britain.

Today, October 5, pasta shelves were empty in Sainsbury’s stores in Birmingham and Surrey, and at Tesco stores in Edinburgh and Bristol.

In one Tesco store, there was a sign next to an empty space where its own-brand penne pasta quills would normally be stocked that read: “Sorry, out of stock. Next delivery expected Sunday, 17th October.”

However, a Tesco spokesperson has assured that there isn’t a widespread pasta shortage and claims there is availability across stores.

Jason Bull, director of Eurostar Commodities, the UK’s leading independent ingredients experts, said: “We should be under no illusion climate change is causing this. It’s crazy. I’ve been doing this for 17 years, but I’ve not seen this before.

“It’s because of the durum crop – pasta is made with durum wheat and the biggest exporter is Canada.”

“They’ve had a very bad crop due to extreme dry weather – it’s hardly rained since they planted the crop so they’re down about 42%. It had a big drop and then the USA is down nearly 50%.

“Couple that with the opposite effect – in Europe and France they’ve had excessive rain, so the wheat crop isn’t suitable for milling. So, it’s a bad situation on both sides of the Atlantic.”

Shoppers have also taken to Twitter this week to complain about the lack of pasta in shops.

One person said: “I was in Tesco on Sunday. I can honestly say that I have more pasta in my home than they had on the shelves there.”

Another tweeted: “No pasta in Tesco again!”

A third said: “Sainsbury’s will you be suffering a pasta shortage for a while! Twice in the last week I’ve been in your stores and no pasta.”

“Availability in some product categories may vary but alternatives are available and stores continue to receive deliveries daily,” they continued.