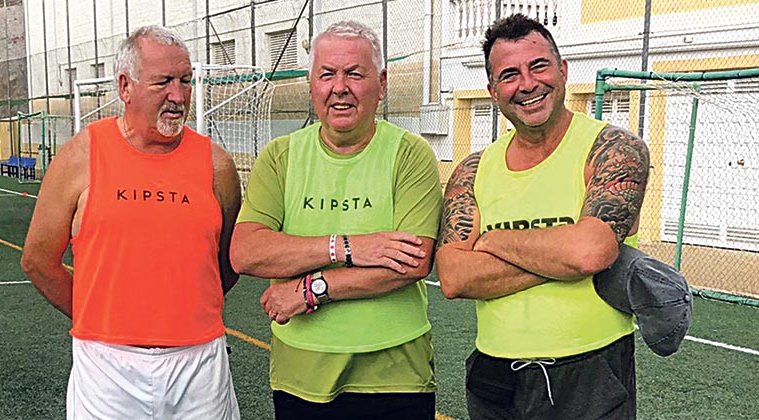 A member of Benalmadena Walking Football Club collapsed whilst playing walking football at the Polideportivo Benalmadena Pueblo on Monday October 11.

Walking Football is played by over 50s therefore the risk of injury or illness is always present. Newcomers are advised to check with their doctor before giving it a try.

In last Monday’s incident a player collapsed and first diagnosis suggested a heart attack. Club members Kevin Brabbs, Bob McNeil and John Blackman got to work using skills they learned only a few months previously from a visiting player Martyn Heath, an Instrument Technician at a UK hospital, and a recent refresher course.

Martyn’s training came to good use as the three continued to give their teammate CPR until the arrival of the Emergency Services, especially when it was learned later that it was not a heart attack, but the heart had literally stopped.

Doctors at the hospital made it very clear that the rapid intervention of our member’s teammates saved his life.

He was admitted to the Intensive Care Unit in hospital and on Wednesday moved to an Observation ward.

He later underwent an operation to put a device under the skin with wires to his heart to start it should it stop again.

Latest. On Sunday October 17 he was in a general ward and if no post op infections would be allowed home on Monday October 18.

It’s reassuring for the South of Spain’s some 300 members that their clubs take Health and Safety very seriously. The need to have equipment and treatment immediately available for the use of First Responders in the event of a medical emergency is also very important and clubs are working to make sure they are in place should an emergency arise.

OTHER NEWS. Walking Football South of Spain was represented at the prestigious Eurocopa Tournament at Albufiera on the Algarve last Monday and Tuesday by Malaga WFC competing with 20 of Europe’s top walking football clubs.

While not returning with a trophy the Malaga contingent were happy to have competed, including wins against the eventual winners, East Algarve A (3-1) and East Algarve B (2-0) and made many new friends and contacts.

WFAI Associate club The Walking Lions WFC from Bilbao took three teams and acquitted themselves well in their first ever tournament.

Monday October 18  saw the Championship resumed when Calahonda WFS took on high flying Walking Dead B at the Finca Naundrup.

This ‘local derby’ was predicted to produce a lot of goals. Find out how many were scored and other fixtures in next week’s Euro Weekly News. Make sure you get your copy…

The HIDROMASTER Premiership resumes on Sunday October 23  with  Table Topping Viñuela hosting Nerja  A and B teams in a ‘local derby’.