This week’s weather forecast for Spain 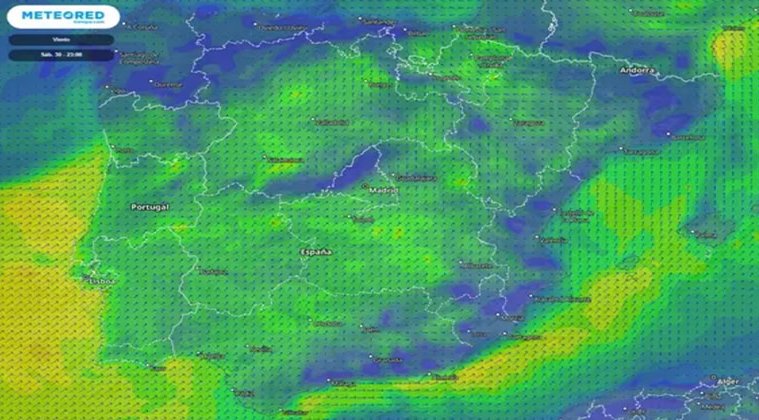 This week’s weather forecast for Spain

The weather throughout October so far has been quite dry and stable, but all that is about to change, according to Samuel Biener, an expert at Meteored (tiempo.com).

Most of Spain will experience slightly cloudy skies for most of Tuesday 26, with fog expected in lower valley areas. The Cantabrian coast and the Canary Islands can expect some rain as well.

In between Tuesday afternoon and midday on Wednesday 27, in the south of the Valencian Community, the coastal region of Murcia. and in the east of Almeria, there could well be locally intense downpours with heavy rainfall.

During the first half of this week, temperatures are likely to drop, with nighttime becoming colder. Interior areas and mountainous regions may see some frost. Daytime mercury readings are predicted to be above 20°C in almost all of Spain, while in the Guadalquivir and Guadiana valleys, temperatures could exceed 25ºC.

In the north of the Atlantic on Wednesday 27, starting from Iceland, a vast area of ​​low pressure will be created, while an anticyclone from the Azores will move south. With this distribution, a humid and temperate flow will be channelled that will start from the Caribbean Sea, and the entire peninsula will be affected by this atmospheric river of humidity.

A change will take place on Thursday, 28, with the presence of morning rains on the Mediterranean coastal areas, that could be intense on the coast of Catalonia, the Balearic Islands, and the surroundings of Cabo de la Nao. By the afternoon, a very active first front in the northwest of the peninsula could cause strong rainfall in some parts of Galicia.

Friday 29 will see the well-known ‘abbregos’, the southwestern component of the wind, which will gain intensity. The western half and the centre of the peninsula could experience rainfall, extending from west to east. This will start in the west of Castilla y Leon, and Extremadura, probably with heavy downpours.

As Friday progresses, this weather pattern will spread to the western provinces of Andalucia, where winds could be strong, as with the Community of Madrid, Castilla-La Mancha, and the Cantabrian mountain range.

For the bridge of Todos los Santos, the weather is predicted to be very unstable. On Saturday 30, there will be general rains in the interior and the west of the country. By the end of the day, this will reach the Pyrenees, the Balearic Islands and the northeast of the peninsula. Rainfall will be intense and persistent with a south or southwest wind, which will then affect the southern face of the central system, or southern Andalucia.

For Sunday 31, nothing will alter much. Rains will become more widespread in the northeast of the peninsula, and on All Saints’ Day, the wind could begin to roll to the northwest, with a decrease in temperatures. Most of the rainfall will be restricted to Betica, the Cantabrian slope, the Balearic Islands, Catalonia and the Pyrenees, where snow levels will drop.

In some of the central regions of the country, accumulated rainfall can be as much as 200 litres/m², while in Sierra Morena, Montes de Toledo, and in the surroundings of the Rias Baixas, it can exceed 100 litres/m², as reported by larazon.es, (with thanks to Samuel Biener from Meteored).