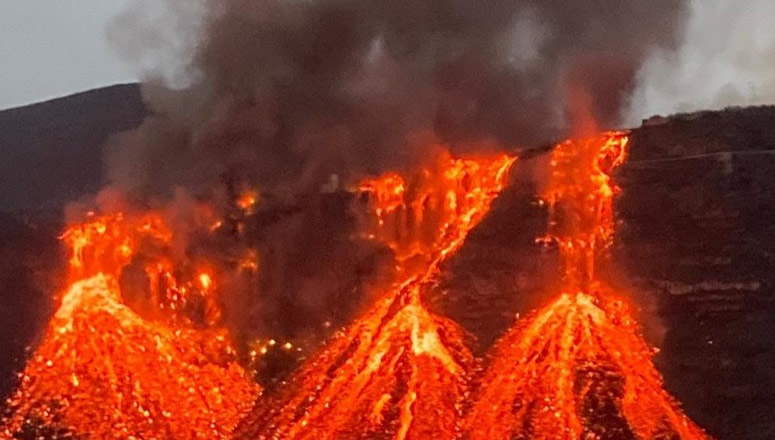 Another stream of lava from the Cumbre Vieja volcano on the island of La Palma has reached the coast this afternoon, Tuesday, November 9. It fell in three strips from the clifftop at the Los Guirres beach, next to the existing fajana, just 50 metres from the water.

Francisco Prieto, the spokesman for Pevolca, the steering committee of the Canary Islands Volcanic Emergency Plan, seemed to think the lava flow was insufficient to form another new fajana. “It lacks too much to fill” to reach the sea”, he explained.

This was backed up by David Calvo, the spokesperson for Involcan, the Canary Islands Volcanological Institute, who also rules out the lava reaching the sea imminently.

Involcan technicians are observing the three areas of lava accumulation on the beach, all of which originate from the same main stream. They are located between the one that formed the fajana, and the one that reached the La Bombilla neighbourhood.

According to Prieto, the lava has fed in the last hours to streams 1, the one that formed the delta, and stream 2, which has reached the Los Guirres beach. Both of these have gone almost a whole month without any “visible contribution”, until today. Today’s contribution of lava was “probably” being channelled up to now through volcanic tubes.

The rest of the flows remain “stable”, said Prieto, who has specified that the affected area has increased in the last 24 hours by 3.42 hectares, to a total of 988.27 hectares.

Maria Jose Blanco, the director in the Canary Islands of the National Geographic Institute (IGN), has pointed out that the eruptive process has now entered a “more stable” phase. But, she emphasised, that stability has to be maintained “for a certain time”, and even diminish “gradually, while maintaining “all the parameters: seismicity, deformation, tremor, and gas emission, as reported by diarioadesevilla.es.