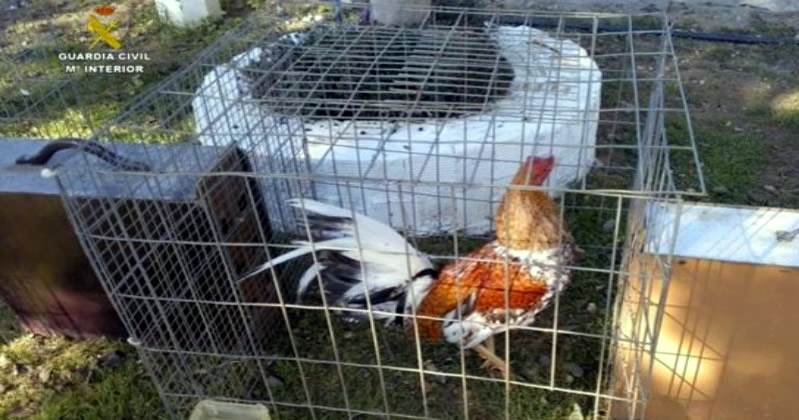 Guardia Civil officers from the Roca de Carmona unit have dismantled an organised gang dedicated to the theft of fighting cocks. They had concentrated specifically on stealing the ‘Spanish combatant’ breed. These four detainees, three males, and a female, are believed to have stolen up to 80 such cocks.

‘Operation Mercefu’ was launched in 2019, when evidence of robberies came to the attention of the police. These thefts had occurred in cattle farms, and other types of private facilities in the provinces of Cordoba and Sevilla. One common denominator linking each theft was the type of bird involved.

Investigating officers subsequently began to collect information on the reported events that had common characteristics. A ‘modus operandi’, and identified vehicles soon became apparent. Indications were obtained that the responsibility corresponded to members of a criminal group whose main objective was the theft of this kind of fighting cock.

As reported in a statement by the Guardia Civil, the criminals were fans of the breeding of this species of rooster. They had attended events or fights involving these birds, where they made a note of observing the most prominent fighters. Then they located the places where the fighting birds were kept, and targetted them at a later date.

Sufficient evidence was soon collected identifying that the suspects could be involved in the commission of a dozen crimes of robbery with force. Investigators proceeded to arrest four people, aged between 20 and 40 years. Another member of the gang, who was already in prison, was also charged.

The five detainees were also charged with alleged crimes against road safety. This was because on the occasions when they were surprised, or an attempt was made to intercept them, they fled in high-speed vehicles, ignoring the police patrols that tried to stop them.

They allegedly performed dangerous manoeuvres to overtake vehicles, endangering other drivers, and generating danger by leaving their vehicle abandoned in the road, as reported by sevilla.abc.es.