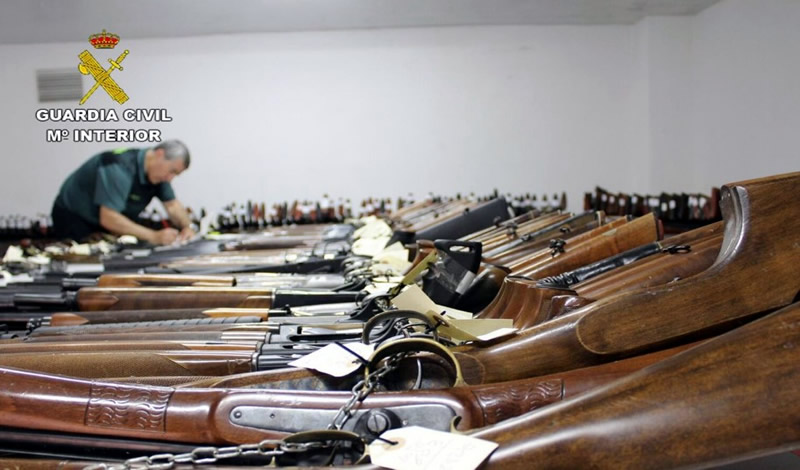 The Firearms Intervention department of Granada’s Guardia Civil will conduct its last-ever public auction of weapons in the province next week. This is due to the latest modification of the Arms Regulations, which eliminates this acquisition procedure.

As outlined in a press release from the force, Royal Decree 726/2020 has now been enforced. This has modified the Weapons Regulations, and as a result, the circular that regulated the auction of weapons in the Guardia Civil Commanderies has been repealed.

From now on, if the owner does not dispose of their weapons by other means and they are deposited in the Intervention of Arms, they will be destroyed after a period of one year. The only exception, in this case, will be when the weapon has a specific historical heritage that can be proven. It is envisaged that public auctions to dispose of this type of weapon will still be possible, although this is not confirmed.

A total of 886 various weapons will be on display

Between November 22 and 26, the 886 weapons to be auctioned will be on display from 9am until 1pm daily. The main auction will then take place on November 29, using the closed envelope method. Among the weapons on display will be 620 shotguns, 51 carbines, 34 rifles, 116 pistols, 47 revolvers, three muzzleloaders, a Flobert system weapon, and 14 from other categories.

Any natural or legal person authorised to possess, use, or trade the weapons for which they intend to bid is allowed to attend the auction. To be able to bid in the auction, all interested parties will be provided with the necessary form and specifications by the Firearms Intervention of the Guardia Civil of Granada.

Those who intend to bid for a weapon will not have to go to the Granada Tax Office to collect the mandatory document. Instead, they will be able to collect it at the Granada Weapons Intervention itself.

With the aim of saving inconvenience for people, a document will be provided, in order to designate a bank account number to which the deposit deposited can be transferred, in the event that the weapon for which they have bid is not awarded.

Due to the strict measures imposed by Covid-19 there will be a capacity limit to access the exhibition, as reported by granadadigital.es.