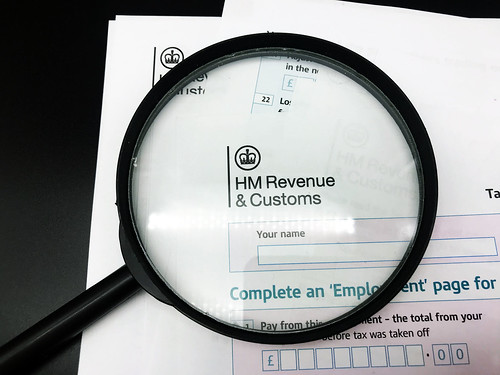 "HMRC forms and a magnifying glass stock" (CC BY 2.0) by DPP Law

The new HMRC office site based in Newcastle is owned by major Conservative party donors through an offshore company based in a tax haven. The deal to move tax officials into the new office complex was revealed by The Guardian newspaper after the 25-year lease was finalised on Tuesday 23 November.

The deal will see officials at the government department responsible for preventing tax avoidance working from a site owned by a subsidiary of a company based in a secretive offshore tax jurisdiction.

The new site in the northeast is part of a regeneration scheme created by a British Virgin Islands (BVI) entity controlled by billionaire property tycoons David and Simon Reuben. The brothers, their family, and their businesses have donated a combined £1.9m to the Conservative party. The brothers were reportedly at Boris Johnson’s table at an exclusive Tory fundraiser earlier this week. Cabinet Office minister Steve Barclay, among other officials, announced the deal on Tuesday.

The Sunday Times Rich List has the brothers as the second richest family in the UK. David’s son Jamie, is close to Boris Johnson and has spent time serving as a party treasurer. He has donated more than £750,000 to the party since Johnson was elected. The family has regularly used offshore BVI companies to hold UK business interests.

The new HMRC office site is owned and will be developed by a UK company, Reuben Brothers (Newcastle) Limited, according to an HMRC spokesperson. Companies House documents show the sole shareholder of this business to be Taras Properties Limited in the BVI, however.

HMRC’s spokesperson insisted the Reuben brothers’ company would be subject to normal UK tax regulation. “The lease payments and any gains on the sale are subject to UK tax,” they said. “HMRC is satisfied the deal represents the best value for money for the taxpayer.”

There is no suggestion of any wrongdoing by the Reuben brothers and owning UK property through offshore companies is perfectly legal.

But the government’s decision to move 9,000 HMRC staff to the site comes as it faces calls to honour a commitment to introduce a register of overseas companies owning UK properties. The bill is still in draft but is designed to crack down on the use of offshore companies to obscure owners’ identities and funds.