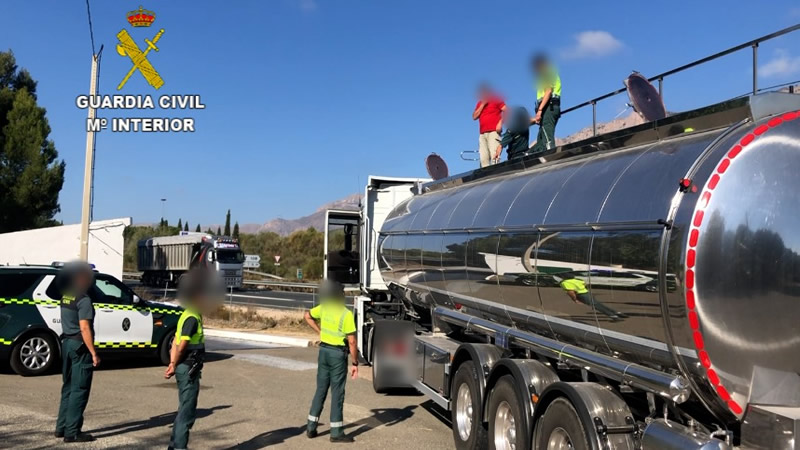 A press release on November 28 from the Guardia Civil

SEPRONA, and the Traffic Group of the Guardia Civil have carried out more than 700 controls and nearly 400 inspections of companies linked to the transport of foodstuffs in tanks.

During the first half of 2021, the Guardia Civil in collaboration with AESAN (Spanish Agency for Food Safety and Nutrition), verified the existence of irregularities committed by some transport companies that did not offer guarantees of correct food transport, with a potential risk to public health.

Lorries equipped for the transport of foodstuffs were detected, which used these tanks to transport other non-food products, without the corresponding washing of the tanks during return trips to their companies. These included waste products, animal feed, and fuel. In this way, they were able to cut costs. In addition, they removed the mandatory “foodstuffs only” stickers to avoid inspections by the competent authorities.

Ten people have been arrested and investigated for alleged offences of false documentation, and against public health, for transporting foodstuffs in sub-optimal conditions for consumption.

Thanks to this operation, it has been possible, on the one hand, to eliminate certain irregular practices carried out by some transporters specialised in these transfers, and on the other hand, to guarantee the safety of the agri-food chain.

Nevertheless, it was found that practically the entire sector operates in accordance with current agri-food safety regulations. The good practices of the majority of transporters in Spain that have been so fundamental in recent years in the distribution of commodities with the Covid-19 pandemic are highlighted.

All the irregular foodstuffs identified as being contained in the tanks were finally destroyed, in accordance with the regulations in force.

Of the detainees, eight were in the province of Almeria, one in Valladolid, and another in Lerida.