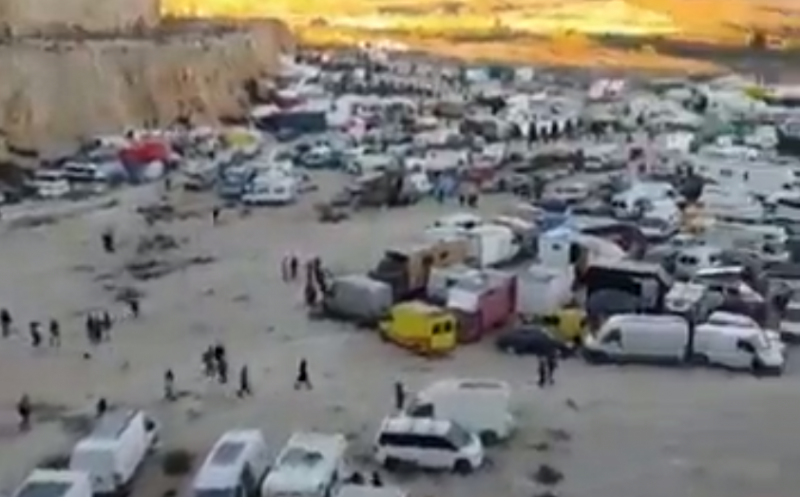 An unauthorised New Year party has persisted for four days in a quarry in Almeria.

The disused quarry located in El Hueli in Sorbas (Almeria) has been the scene of an unauthorised party in which hundreds of people have gathered since New Year’s Eve in dozens of vehicles and caravans on a space that has been set up with tents and different stages with music.
The Sorbas City Council has assured that it had knowledge of this ‘rave’ on December 31st as a result of the notices given by residents nearby.
“The power of convocation is strong, because there are people from everywhere, from France, Switzerland, Holland…” said the mayor of Sorbas, Jose Fernandez, who is still waiting to be informed about the measures that will be carried out to evict the members of the party.

There is also a lack of prevention measures against Covid at the event, where participants do not wear masks and do not respect interpersonal distance measures, according to the videos and images that circulate on social networks.
“We continue in contact with the Government Sub-delegation, Junta de Andalucia, monitoring this ‘festival’ that the City Council does not have the relevant permits, waiting for news of the actions carried out,” Fernandez added in a message published on his social networks.
The mayor has assured that during the past dawn and the morning of today, January 4, the music was still heard, although with “less intensity” in the area of the party.
According to social networks, the Guardia Civil intervened in the area yesterday, although its “effectiveness has been low” according to the results.
Given the high volume of people who are concentrated in this space, the officers are working on an operation that allows them to evacuate the area in an orderly manner and with regulated traffic, which could take place this afternoon.