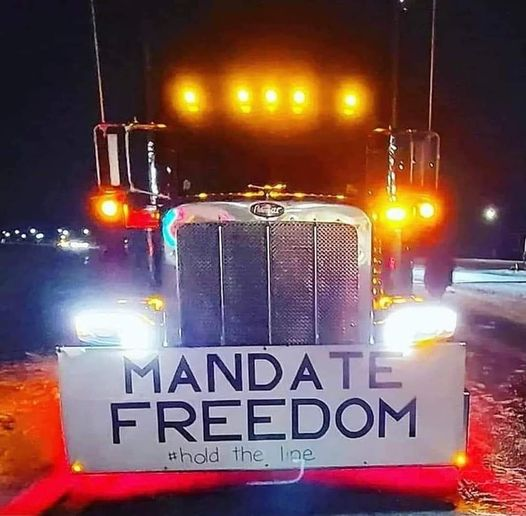 THE Canadian truckers convoy, which is on a cross-country journey to protest against the vaccine mandate brought in by their government, has had its GoFundMe account frozen, while Canada’s PM Justin Trudeau calls the huge “Freedom Convoy” a “small, fringe minority”.
GoFundMe has frozen access to nearly $4.5 million (€3.3 million) in funds raised by the trucker convoy, which would be used to help with the costs of fuel, food and lodgings as the truckers make their way from Vancouver to Ottawa. The convoy left Vancouver on Sunday, January 23 and are due to reach Ottawa on Saturday, January 29.
“We require that fundraisers be transparent about the flow of funds and have a clear plan for how those funds will be spent. In this case, we are in touch with the organizer to verify that information,” Rachel Hollis, a GoFundMe spokeswoman said in an email.
“Funds will be safely held until the organiser is able to provide the documentation to our team about how funds will be properly distributed.”
As of Tuesday, January 25, the funds were raised from 58,300 donors, according to the GoFundMe page of the “Freedom Convoy.”
However, National security expert Jessica Davis warns that those who have donated to groups in support of ongoing truck rallies could be found guilty under the criminal code, as they “directly or indirectly” could provide financial services intended to carry out any terrorist “activity” or benefit such a “group”. This is due to the riots at the Capitol building in Washington on January 6 last year.
Meanwhile, Canadian Prime Minister Justin Trudeau said that the “small, fringe minority” on their way to Ottawa “hold unacceptable views” and are undermining the rights, freedoms and values of Canada.
“The small fringe minority of people who are on their way to Ottawa who are holding unacceptable views that they are expressing do not represent the views of Canadians who have been there for each other, who know of that following the science and stepping up to protect each other is the best way to continue to ensure our freedoms, our rights, our values, as a country,” Trudeau said Wednesday, January 26.
Answering questions about the coming protest on Parliament Hill, Trudeau said that Canadians who have stepped up to “do the right thing,” by getting vaccinated are the ones protecting “the freedoms and the rights of Canadians to get back to the things we love to do.”
Former NHL player Theo Fleury is one of many people who have spoken out about Canada’s vaccine mandate laws. Speaking on The Ingraham Angle show, Fleury said: “Right now in Canada we have one of the biggest revolutions happening – there’s 50,000 truckers & about 1.4 million people headed to the parliament in Ottawa – they’re going to stay there until Trudeau resigns, or they give us back all of our freedoms & rights.”