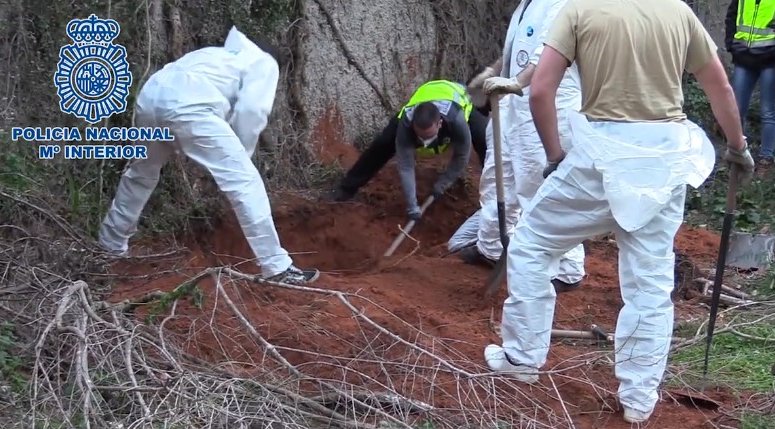 American man arrested for murdering his wife and burying her body in Valencia. image: policia nacional

The National Police has arrested a US citizen who is accused of murdering his wife in the Cadiz municipality of Los Barrios, and later burying her in the town of Alzira in Valencia, where the body was found on January 21.
As reported by the force in a statement on Tuesday, February 1, the alleged perpetrator of the crime, the victim’s partner who, like him, was of American nationality, was arrested last Friday, January 28, when he returned to Spain from his native country.
The investigation began after a woman denounced the disappearance of her friend through social networks, an American citizen who was traveling in Europe with her husband.
Officers focused their investigations from the beginning on the search for the woman’s partner, and the vehicle they used to travel. Their car was located at Milan’s Malpensa airport, in Italy. The man had taken a plane from Italy to the United Kingdom, and then on to the US, to his address in Denver, Colorado.
Investigators traced the victim’s last known whereabouts to some apartments in the Cadiz town of Los Barrios. When viewing the security cameras of this accommodation, they observed the arrested man dragging a body by the ankles and inserting it into the boot of his rental car.
A search then began for the body, which was located on January 21, half buried in the city of Alzira. Reviewing security camera footage near to the location the body was found, officers again observed the detainee.
This time on the morning of December 27 the man seen purchasing a shovel, a stick, an axe, anti-cut gloves, and a cutter, in an industrial supply establishment. Some of these tools corresponded to those that were located when the body was discovered.
On January 26, the FBI liaison at the US Embassy in Madrid informed the investigators that they had received information that the suspect in the murder would be ready to travel back to Spain in the near future. As a result, last Friday, January 28, he was arrested at the Adolfo Suarez Madrid-Barajas airport, in Madrid, and brought to justice, as reported by 20minutos.es.
For more info on the Valencian Community: https://www.euroweeklynews.com/news/spain/valencia-news