Putin's famous six-metre-long meeting table was made in Valencia 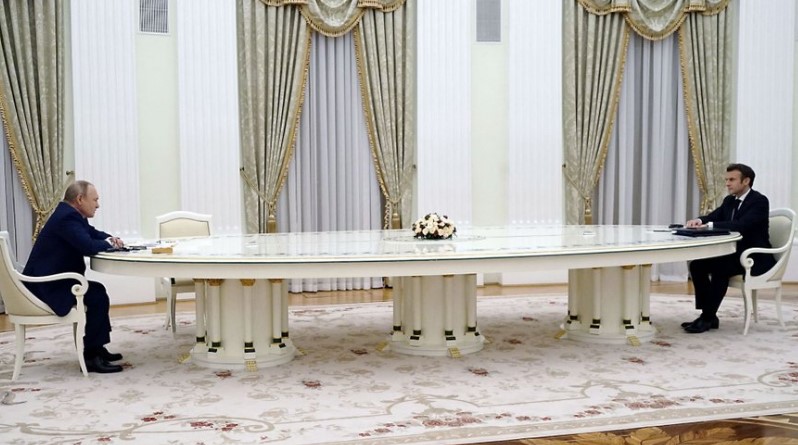 Putin could be ‘reaching his end date’ image: [email protected]@jchaltiwanger

Vladimir Putin’s now-famous six-metre-long (20ft) white table, at which several world leaders have been pictured sitting in recent weeks, was manufactured by a company in the Spanish city of Valencia.
This enormous piece of furniture has become famous in its own right after images and memes flooded social media. It played a central role in images of the Russian leader’s meetings with the likes of French Prime Minister, Emmanuel Macron, and, more recently, Olaf Scholz, the German Chancellor.
As reported by the Nius newspaper, the splendid table was designed by Vicente, a resident of the Valencian town of Alcasser. “Until I saw her packed and loaded, I did not rest. You cannot imagine the suffering that table was for me”, the furniture manufacturer assured the media.
Scholz and Putin sat at this very table in Moscow today, Tuesday, February 15, to talk about the crisis in Ukraine, in an attempt to avoid any military escalation in the region.
As the manufacturer explained to the newspaper, it was not the only order they had from them. “It’s a pride, but it was a very big responsibility, you couldn’t make mistakes, and you had to follow their strict instructions”, he said of the item which he estimated was ordered by the Kremlin back in 2005.
Vicente, from the Zaragoza Group, said he made the table “mainly with beech wood from the southern Alps, on the border between France and Italy, from trees born and grown in the shade”.
When completed, it was lacquered in white and a specific gold leaf was added, which, according to Vicente, “We brought it expressly from the best manufacturer in Italy, to satisfy his demands”.
The factory is now closed, but at that time it had a luxurious catalogue that supplied customers from other countries such as Japan and Vietnam. Vicente preferred not to reveal the actual cost of the table, but his work has exquisite work has now been seen all over the world, as reported by 20minutos.es.