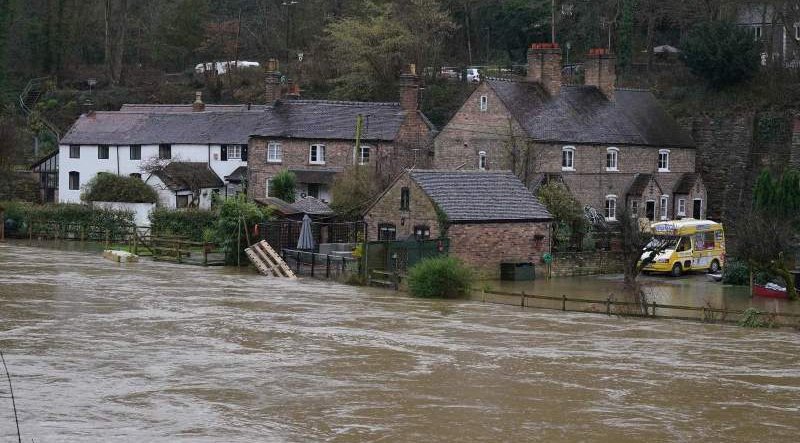 Storm Franklin has moved into the UK hot on the heels of storm Eunice bringing more rain and strong winds, resulting in cancelled trains, homes being evacuated and at least one river bursting its banks.
More than 15,000 homes remain without power for the fourth day as Power Networks struggles to reconnect homes and business as high winds hamper efforts. The areas still without power include 1,600 in Essex; 1,680 in Suffolk, 690 in Norfolk, 3,400 in East Sussex, 6,000 in Kent and 1,900 in West Sussex.
Hundreds of people have also been evacuated from their homes as the River Don has broken its banks near Sprotbrough in South Yorkshire, with the area’s footpaths underwater according to the emergency services. More homes could be evacuated if rains continue with the River Severn also causing concern, threatening to burst its banks with water creeping towards homes in Shropshire, where the flood barriers were erected following continual flooding of the area.
Sever flood warnings remain in place for the River Mersey at Didsbury and Northenden in Greater Manchester, with around 400 residents told to take immediate action and prepare their properties for flooding last night.
A rest centre was set up at Didsbury Mosque for those who were told to leave their homes with nowhere else to stay.
Amber and red warnings remain in place with two severe flood warnings for England, meaning flooding could bring danger to life, and 175 amber flood warnings, meaning flooding is expected; and 172 flood alerts, meaning flooding is possible.
Scotland was covered by 18 flood warnings and seven flood alerts, while Wales was covered by 26 flood warnings and 48 flood alerts.
An amber warning for wind has also been issued by the Met Office that could cause a “risk to life” in Northern Ireland until 7am, while a milder yellow wind warning covers England, Wales and south western Scotland until 1pm.

Train operators have again asked people not to travel today with some having already cancelled services, including South Western Railway and Southeastern Railway, y.
Others announced cancellations to early services, speed restrictions, and said that alternative transport could not be provided for passengers if routes were forces to close due to the weather.
Rotherham Central rail station in South Yorkshire was flooded so badly that its operators said it would be closed until at least Tuesday.

📲 Please continue to check before you travel with @nationalrailenq

This is the first time the UK has been ht with three storms within seven days, since the storm naming system was introduced in 2015. Dudley and Eunice both brought with them heavy rainfall and high winds and although Franklin is not expected to be as bad, damaged will be caused with many areas already suffering from flooding etc.
Franklin is expected to bring gusts of 60mph to 70mph to inland Northern Ireland in the early hours of Monday morning, while 80mph speeds are expected on the coast.
Gales of up to 60mph are expected to sweep the rest of the UK and Ireland.
Emergency services have again asked people not to travel this morning if possible as rivers burst banks, trains get cancelled and homes are evacuated.