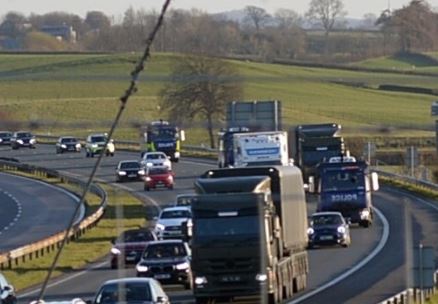 A military convoy carrying nuclear warheads passes through Glasgow, according to Nukewatch UK.

Speaking to Glasgow Live Nukewatch UK Campaigner Jane Tallents explained: “We think that’s the most likely [route] at that time of night. And looking at the timings of it I would say yes that’s probably what it did, took the M74 onto the M8 over the Erskine Bridge and up the A82 at Loch Lomondside.

“I know it was about 11.30pm last night that it got into [RNAD] Coulport. I think there were four warhead carriers I believe. Our reckoning is that each of those trucks can carry two but one of the trucks is empty as a spare in case breaks down. So if there’s four we expect there to be six warheads, or up to six warheads anyway”.

Jane revealed: “There hasn’t been one since October last year which is a bit strange. But there was a bit of a flurry in the end. There must be some reasoning in their madness but they’d never enlighten us what that is. But yeah this is back to the routine, just refurbishment. They are not arming up to bomb Russia or anything like that, but they could do that anytime.

“I don’t think this convoy is of any more concern than the fact that we are always, 24/7, armed and ready to start a nuclear war. And yeah obviously this current situation is very, very alarming. And how quickly some incident could just provoke something that gets all out of our control quickly.”

She went on to add: “All the things that some of us have worried about constantly since the 60s, they come to pass really. People have forgotten about it but they are there. And this sort of tension is exactly why we said when the Soviet Union fell apart that NATO should respond by disarming the nuclear weapons – that was the time to sit down and get rid of them. It wasn’t just Russia that didn’t want to, it was America, Britain and France were all quite keen to keep them as well and play power games so it’s set us up for all this”.