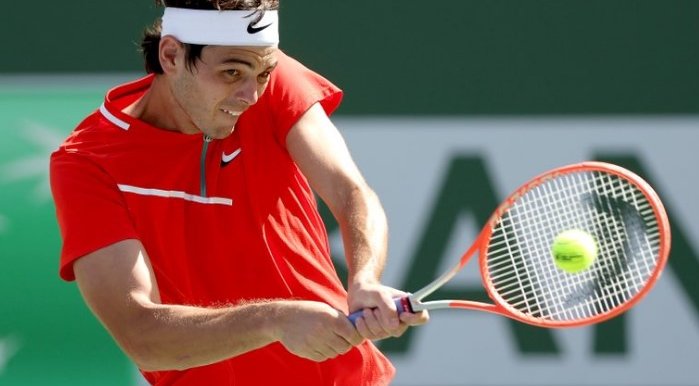 Spanish tennis legend Rafael Nadal has finally been beaten in 2022. He suffered a straight sets defeat against 24-year-old American star Taylor Fritz, in the final at Indian Wells. Nadal came into the final off the back of a 20-match winning sequence, including the Australian Open in January.

Appearing to struggle from the start, the 35-year-old Spaniard soon found himself on the wrong end of a 4-0 scoreline. At this point, he left the court to have some treatment. Nadal returned to play but could do nothing to avoid eventually losing the first set 6-3.

With the second set level at 5-5, Fritz saved two break points before winning a tie-break and taking the set 7-5. “This is one of those childhood dreams you never even think will come true”, he commented excitedly after the win. Incredibly, he is the first American since Andre Agassi in 2001 to win at Indian Wells, and is the young American’s first Masters 1000 victory.

In his semi-final win over Russia’s Andrey Rublev, the Californian had suffered an ankle injury, leaving some doubts about his fitness coming into the final. “I can’t even begin to describe how ridiculous it is to play, how I could play today, I’ve never experienced pain like I did before the match”, Fritz admitted.

Adding, “I took a couple of steps and screamed. I was trying to act tough, and we did a lot of work leading up to the match. I went through a rollercoaster of emotion, and all of a sudden being really happy thinking maybe I can play, but it didn’t affect me at all”.

“I tried my best during the last two weeks, today was not possible. I had a good fight until the end I think”, Nadal said afterwards. “It’s been a while since I had the opportunity to play here but I am very happy to be back, and really enjoy it a lot, every single day I spend here. We can be very happy with how things have gone this last couple of months”.

An inspired @Taylor_Fritz97 pulls off spectacular win over Nadal 6-3 7-6 to win the biggest title of his career!#IndianWells pic.twitter.com/lxWCRvSji6