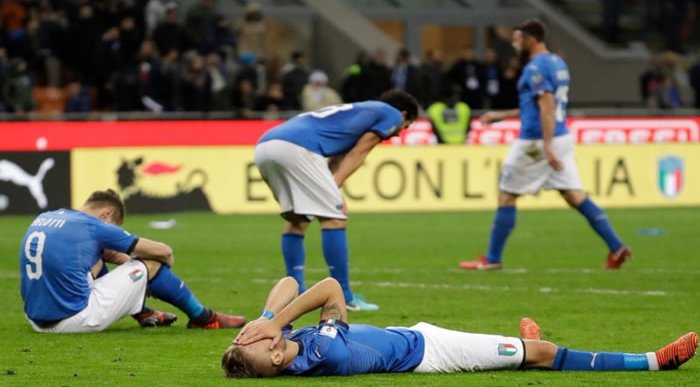 One of the biggest shocks in World Cup history took place in Palermo on the evening of Thursday, March 24. Reigning European champions Italy were playing at home against North Macedonia in the play-0ff for the 2022 World Cup in Qatar.

What happened can only be described as one of the most sensational last-gasp victories ever occurred. In the dyings seconds of the match, with the score at 0-0, a shot smashed from outside the penalty area by Aleksandar Trajkovski hit the back of the Italian net to give the visitors the most unexpected of wins.

Ironically, Trajkovski used to play for Palermo. There followed scenes of Italian coaching staff and players falling on their knees in total disbelief, while chaotic celebrations ensued among the North Macedonians.

A World Cup without Italy seems almost impossible, yet remarkably, this is the second consecutive campaign that the Azzurri have failed to qualify for. Only last Summer, Roberto Mancini‘s men were hoisting the Euro 2020 trophy into the air at Wembley stadium.

They ended up in this set of play-offs after coming a very unconvincing second in their qualifying group behind Switzerland, after drawing four of their matches. What appeared on paper to be a foregone conclusion – against a team ranked 67th in world football – has turned into a nightmare.

North Macedonia managed only four attempts on goal throughout the game, and had just 34 per cent of the possession. They will now meet Portugal in the play-off final, who beat Turkey 3-1 in the other play-off semi-final, thanks to the usual inspirational effort from Cristiano Ronaldo.

Proud of you #Macedonia 🇲🇰#Italy aren't going to the 2022 World Cup. pic.twitter.com/zBUJUPH9SU