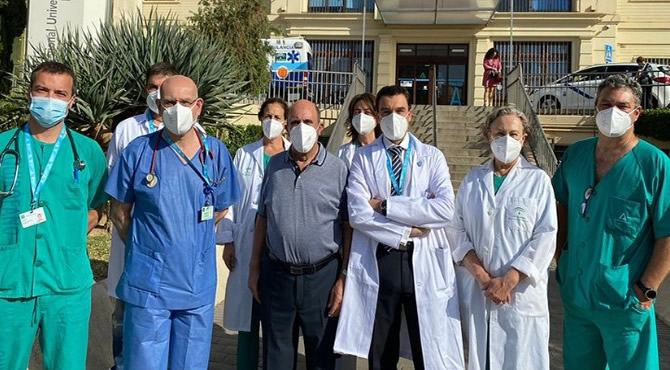 Surgeons from the Regional Hospital of Malaga have carried out a unique life-saving heart operation on a 73-year-old man. Francisco Camacho Pascual was admitted in a critical condition following a traffic accident. After 55 days in the hospital, he has been discharged today, Thursday, May 19.

A team of nine medical professionals, including emergency department staff, along with Radiology and Cardiology staff, managed to stabilise the patient. As confirmed by the team’s spokesperson, Mr Pascual had “a large hole of 5 centimetres in the right wall of the heart”.

He was transferred to the ICU very unstable, in a very critical situation. His chances of dying or being left with serious consequences were very high. The team performed a transaesophageal echocardiography.

As explained by Jose Francisco Valderrama, the cardiovascular surgeon, the situation was even more critical because in a previous surgery the patient had his pericardium removed – this is the membrane that surrounds the heart to protect it.

The absence of this structure makes surgery difficult because the organ adheres to adjacent areas and increases the risk of serious complications when starting the operation. “After removing the adhesions from a previous surgery, we located the heart defect and managed to repair it by suturing a patch of bovine pericardium to the walls of the ventricle”, said Valderrama.

After 40 days in the ICU, Mr Pascual was transferred to a ward, and has now been discharged. A similar case in Galveston, Texas, is the only worldwide precedent, recorded in 2016, as reported by hospitalregionaldemalaga.es.