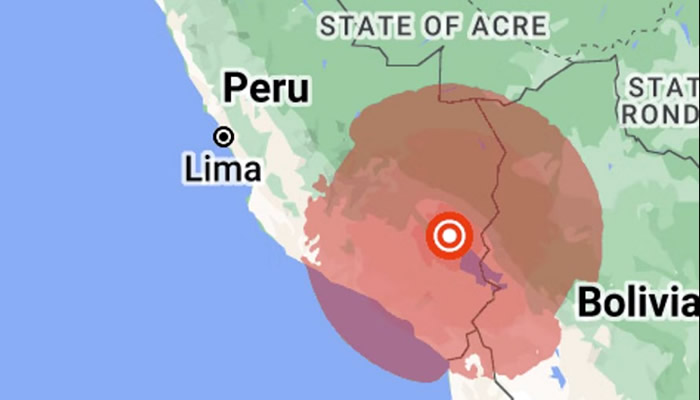 Image showing the location of the earthquake in Peru. Credit: Google maps.

The South American countries of Peru and Bolivia have been rocked by a powerful 7.2 magnitude earthquake.

According to the US Geological Survey (USGS), in the early hours of  Thursday, May 26, a powerful 7.2 magnitude earthquake struck large areas of the South American countries of Peru and Bolivia. There were no immediate reports of danger to life, nor of any damage to buildings.

The strong quake occurred at a depth of around 22okm (136 miles). At this depth, the tremor is termed as taking place at an “intermediate-depth”, which is unlikely to cause any significant damage. Quakes that occur at shallow depths are the ones that cause the most destruction says USGS.

Tremors were first felt at around 7.02am local time reported USGS. It was felt with the most intensity just north of Lake Titicaca, in the mountainous Andes region of southern Peru. Buildings in the cities of Cusco and Arequipa were reported as swaying from the force of the tremor.

According to AP, the quake was felt as far afield as the capital of Bolivia, La Paz. USGS said the heavy movement was most likely felt even in parts of northern Chile, and western Brazil.

Peru is located on the collision zone between the Nazca and South American tectonic plates, so earthquakes are not uncommon in the country. In 2019, a quake measuring 7.0 magnitude hit in a region close to Thursday’s tremor USGS recalled, and said that Thursday’s quake is the strongest ever registered in the region.

Frequent geological activity – including earthquakes and volcanoes – is caused along most of the Pacific coastlines of both Asia and the Americas thanks to the movement of these tectonic plates. This movement historically is responsible for the formation of numerous volcanoes in southern Peru, and even the Andes.