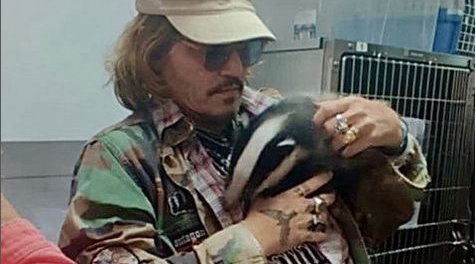 Johnny Depp who met Freddie Mercury, the badger, has seen the two team up with Depp agreeing to be the patron of Folly Wildlife Rescue in Kent.

Depp posted the news on social media on Saturday, June 25 after he was introduced to the Freddie and the rescue centre by Jeff Beck, who has been a patron for some time.

The Pirates of the Caribbean star, 59, had visited Folly Wildlife Rescue in Kent, which Jeff is already a patron of, earlier in the month, where he was pictured cuddling a badger cub.

Folly Wildlife Rescue announced: “Following the success of our patron Jeff Beck’s UK tour, featuring his good friend Johnny Depp, and Johnny’s visit to Folly Wildlife Rescue to see for himself the Trust’s work with wildlife, we’re very pleased to announce that Johnny has done us the great honour of agreeing to become a patron.

“This is wonderful news, as it not only gives a much-deserved boost to our hard-working staff and volunteers but will help bring attention to the increasingly desperate plight of wildlife that worldwide is under ever-increasing pressure from human activities – and needs all the help it can get.”

The rescue centre had earlier shared photos of Johnny with badger cub Freddie, yes named after the great man himself saying: “Guess who’s been to see us at Folly Wildlife Rescue – no, you’re not seeing things – that’s the real Johnny Depp!

“As you probably know, Johnny has been appearing with our Patron Jeff Beck on his UK tour and in a recent break, Jeff’s wife Sandra brought him up to visit us and see for himself the work we do with wildlife.

“And what an incredible afternoon it was for our staff and volunteers, as he toured the hospital’s care and vet units. Johnny was incredibly complimentary and in his own words ‘blown away’ by what he saw.

“To top the visit off, we even allowed him the rare privilege of briefly holding Freddie (as in Mercury!) one of the many orphaned badger cubs we’re currently hand-rearing – and I think it’s fair to say he was bowled over by the whole experience!”

Follys rescues injured, orphaned and distressed wild animals and birds and helps to nurse them back to health – releasing them back into the wild when they can.

Hannah Hall from Folly Wildlife Rescue Trust told ITV on Friday that Johnny’s visit had been a surprise, explaining: “We had a ten-minute warning and then he turned up in his car and came over and shook my hand. It was very surreal.

“He was really genuine, he was in awe of the whole place. I think he couldn’t believe that a wildlife rescue could look like this, so quite complimentary.

“It was just like talking to anyone else really – it didn’t feel like I was talking to an A-list celebrity who I watched growing up. It was quite amazing.

“He thought he could hear monkeys, but it was actually the badger cubs so we explained to him how different the wildlife is here, and he just took an interest in everything.”

Perhaps Johnny Depp, Jeff Beck and Freddie Mercury will get to collaborate musically at some point in the future, but for now, it’s all about making good news.