CCOO union warns that it will denounce Malaga construction companies 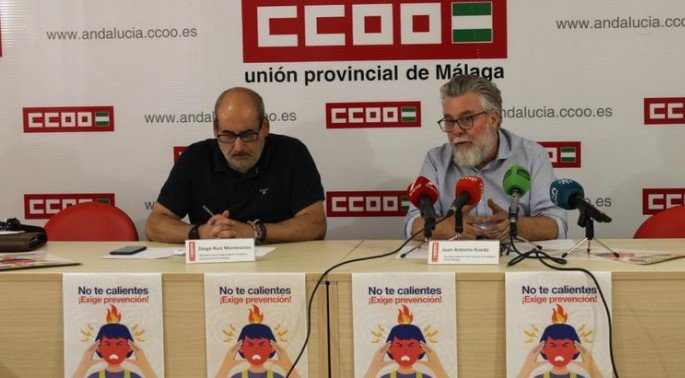 Malaga construction companies will be denounced if they fail to comply with the summer working hours requested by the CCOO union.

As reported by Juan Antonio Rueda, the general secretary of the Malaga CCOO Habitat Union, during the press conference today, Monday, June 27, “This year the campaign motto is ‘Don’t get hot! Demand prevention!'”.

This motto is framed in a context in which, in the case of the construction sector, the employer refuses to accept the union proposal for the intensive, continuous summer shift.

Mr Rueda stated that: “We consider the special summer hours to be a preventive measure of the first order”. He highlighted that as of today, June 27, “We are going to denounce any company that has its staff working after 3pm in construction and public works, for not applying the Law on Prevention of Occupational Risks, and exposing workers to the risk of heat stroke”.

The union leader pointed out that during the past week the CCOO and UGT have tried to jointly negotiate with the employers of the construction sector to approve an intensive day for the summer months.

“The CCOO proposal happens because this day takes place between June 27 and September 3. However, the employer rejects it and proposes doing it between July 18 and August 31. In addition, they want to make a bridge in the second week of December, coinciding with the holidays on the 6 and 8 of the said month” he continued.

Diego Ruiz Montesinos, one of the members of the negotiating table of the Construction Agreement in Malaga added: “After several assemblies of workers in this sector in Malaga, we can say that the vast majority prefer not to take a long weekend in December and instead have the longer intensive working day, since it is very hard to work in the afternoon during the summer months, due to to the high temperatures that are registered in this province”.

This campaign against heat stroke is one of the most important carried out in the entire CCOO state in terms of occupational risk prevention. Both exposure to solar radiation and high temperatures are factors that exponentially increase the risk of suffering an accident at work, not just heat stroke.

It focuses on the organisation of work, adaptation of the day, and the implementation of preventive measures. “To achieve this, two very important things are needed, on the one hand, political will in the part of surveillance, and on the other, business will in the part of anticipation and compliance”, explained Juan Antonio Rueda.