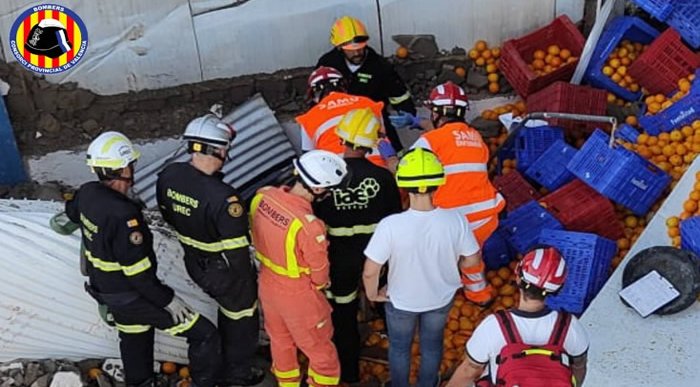 A warehouse collapsed in the Valencian town of Pobla de Farnals resulting in the death of one workman.

A workman died on Monday, June 28, in the Valencian municipality of Pobla de Farnals after a warehouse belonging to a company in the town collapsed and buried him. The 64-year-old man – the company’s maintenance manager – was missing for around one hour before rescue teams finally recovered his body.

Three Bombers Consorci VLC fire appliances from the towns of Sagunto, Pobla de Farnals, and Moncada, were mobilised to the scene of the incident, along with two ambulances. A rescue and emergency unit, a high-altitude vehicle and the officer on duty were also deployed.

The incident occurred at around 6:30pm in a facility specialising in the sale of oranges, located on the junction between the CV300 and Calle Mirall in Pobla de Farnals. Maintenance work was apparently being carried out on a warehouse when it suddenly collapsed, burying two employees. It is thought that a part of the building’s wall fell, subsequently tearing down the metal structure.

To assist in the search operation, a team of dogs from IAE Rescue, which specialises in locating people was brought in. One of the workmen was found alive among the tangled metal, about 30 minutes into the rescue. The operation was terminated at 11:08pm after the discovery of the deceased.

Psychological help was requested by the Valencian Fire Brigade, for the relatives of the deceased man. A team of three Red Cross workers, incorporating a psychologist, a support rescuer, and a team leader,  treated two male and two female relatives of the dead man, as reported by levante-emv.com.