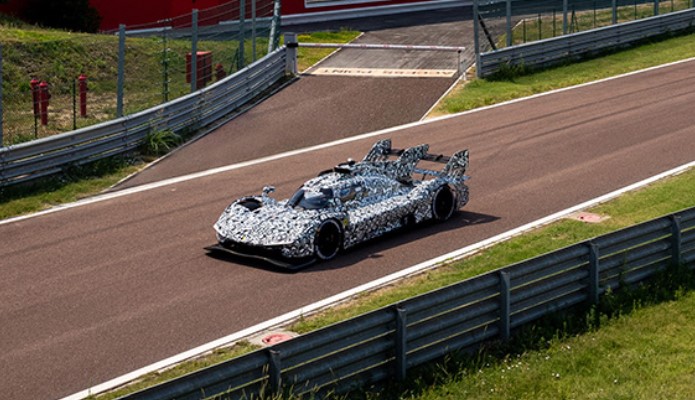 Image of the first time on the track for the new Ferrari Le Mans Hypercar. Credit: Ferrari.com

Motorsports history was made at the Fiorano car-testing circuit in Modena when the new Ferrari Le Mans Hypercar (LMH) was unveiled.

As reported by Ferrari from Fiorano on Wednesday, July 6, 2022

What happened on the morning of Wednesday, July 6 at the Fiorano circuit in the Italian province of Modena will go down in motorsports history. At 9:37 am, after a series of preparatory checks, two-time world endurance champion Alessandro Pier Guidi fired up the engine of the new Ferrari Le Mans Hypercar (LMH), which the Maranello-based company will use in the 2023 FIA WEC season.

The Italian driver completed the LMH’s shakedown in the presence of CEO Benedetto Vigna. In the afternoon, Pier Guidi handed over to Nicklas Nielsen, who concluded the planned test programme.

“After so many months in the simulator, I finally had the chance to drive the real car, and that was a big thrill”, commented Pier Guidi. “Driving the Ferrari that will return to the top endurance class fifty years since the last official participation was very emotional for me”.

He added: “We are only at the start, and much work is ahead of us, but it feels very positive. I am proud and happy to have debuted the LMH, marking the beginning of a new adventure for Ferrari”.

Nicklas Nielsen echoed Guidi’s sentiments: “It was a special day. To be one of the first to drive Ferrari’s Hypercar on the track is a dream come true. Ever since I was a little boy, I dreamt of driving a Ferrari, and doing so in a car that will be competing in the top class is incredible. Of course, it’s still a long way to the car’s race debut, but today we took a small step toward that moment”.

During the day, Ferrari’s engineers concentrated on checking the various propulsion and electronic systems ahead of the development test sessions: They alternated between sessions on the track and long breaks necessary for routine checks.

Once again, the Fiorano track, which celebrates its fiftieth anniversary this year, witnessed a historic moment – the celebration of the return of an entirely Ferrari-produced Sports Prototype to the World Endurance Championship.