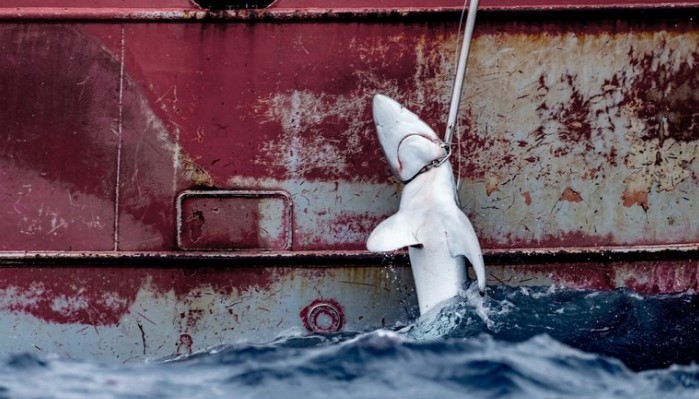 Image of a baby shark being lifted onto a ship. Credit: [email protected]

Spanish and Portuguese ships have been denounced by Greenpeace for their fishing of baby sharks in the North Atlantic.

A report by the NGO Greenpeace published this Thursday, July 14, on the occasion of International Shark Awareness Day denounced what is called the constant longline fishing by the Spanish and Portuguese fleets in shark breeding areas in the North Atlantic.

Entitled ‘Sharks in extinction: how the EU fishing fleets promote the global trade in sharks’, the document claimed that in an average day of fishing, more than 1,200km of fishing lines are used in this area. A total of between 15,000 and 28,000 units of hooks were estimated to be attached to those lines.

According to the environmental NGO, both in the Azores region of Horta, and in Vigo, Galicia, its activists were able to verify throughout the month of May the unloading of immature, juvenile, and young blue sharks among the specimens captured.

“This species reaches sexual maturity from 180cm in males and 200 in females”, it explained, while highlighting their activists observing “the discharge of sharks that measured between 50 and 70cm”.

As quoted by EFE, the report read: “There are no regulations regarding minimum catch sizes, length of fishing gear, or the maximum number of hooks in the area, despite the fact that sharks are essential within the marine food web and their role is especially important to maintain the health of marine communities”.

Pilar Marcos, head of Greenpeace Spain’s oceans campaign, pointed out in a statement that although the EU and its Member States “claim to be leaders in protecting the oceans, their fishing fleets are indiscriminately fishing in shark breeding areas in the North Atlantic because the economic benefit is put before the survival of the species”.

“While the EU and its members claim to be champions of ocean protection, their fishing fleets are deliberately fishing in baby shark breeding grounds in the North Atlantic”https://t.co/5tB9MiQSzM

The shark is one of the most threatened animals in the world, with 17 species in danger of extinction, such as the mako shark. Its biological characteristics make it more vulnerable, with a litter of 4 to 16 offspring after a gestation of between 15 and 18 months, and a spawning cycle every three years.

However, a moratorium on its fishing was not approved until 2021 and only for two years. The International Commission for the Conservation of Atlantic Tunas (ICCAT) warned in 2017 that, even completely prohibiting its capture, its population would take more than 20 years to recover.

Regarding the blue shark, “the uncertainty is such that its current status is unknown, and it only enjoys a fishing quota in ICCAT that is difficult to implement”.

While the North Atlantic longline fishery originally targeted swordfish, according to Greenpeace: “It has come to depend on catching sharks to remain profitable” to the point that as early as 2005 ICCAT indicated that 70 per cent of the non-target catch of the Spanish fleet was sharks.

The global demand for shark products has increased in recent years and their populations “have plummeted by 70 per cent in the last 50 years”, said the report.