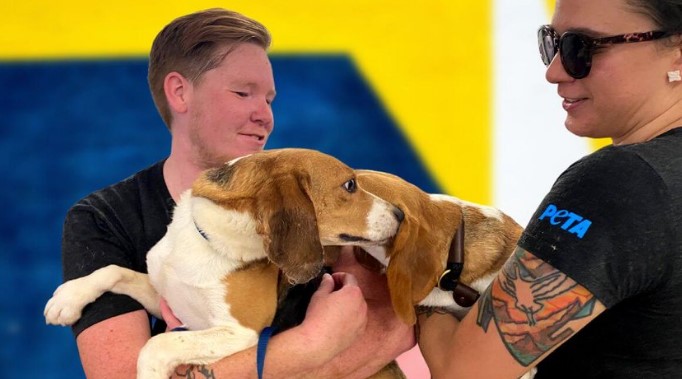 25 beagles have been given a second shot at life after being rescued from animal experimentation labs in Virginia by animal rights organisation PETA.

As updated on Friday, August 5, by PETA, the American animal rights organisation, 25 beagles that had been bred at Envigo facilities to be sold to experimentation labs are now safe. An undercover investigation and years of pressure eventually led to the massive beagle-breeding facility in Cumberland, Virginia, being closed down recently.

The rescued dogs had spent their lives living only on a concrete floor, but can now look forward to much-needed TLC and veterinary care. This includes baths, vaccines, spay and neuter surgeries, dental cleanings, deworming medication, and microchips.

Beagle slumber party! After a vet visit and journey, the rescue Envigo dogs finally got some much-needed rest and cuddles. pic.twitter.com/lhHmFz0FRL

They will subsequently be going to prescreened homes. PETA staff also transported another 13 puppies and four adult dogs to its shelter partner, the Virginia Beach SPCA.

In May 2022, a federal search warrant led law-enforcement officials to seize nearly 450 dogs and puppies found in ‘acute distress’ from the Envigo facility. Federal agents found beagles with untreated wounds and severe dental disease. The dogs had been denied adequate food and water, trapped in cages, and kept in ‘torturous conditions’.

As reported by PETA, another fantastic victory was scored on Monday, August 8, when Egyptair announced its decision to no longer transport monkeys to laboratories. A senior official from the airline emailed the PETA voicing the company’s support of ‘the vision and mission’ of animal protection organisations.

Egyptair’s announcement followed three months of vigorous campaigning by PETA entities worldwide, including protests in Frankfurt, London, Manila, New York City, Paris, and Washington, D.C. Other organisations, including Action for Primates in the U.K., Stop Camarles in Spain, and One Voice in France, had also campaigned to end the shipments.

PETA entities had coordinated dozens of actions in which its supporters flooded Egyptair with more than 100,000 e-mails and hundreds of telephone calls. They urged the airline to stop shipping monkeys to laboratories, where they would be tormented and killed in experiments.

When we come together to take action for animals, we get 👏 things 👏 DONE 🙌

After protests by PETA entities at airports around the globe, e-mails from 100,000 activists, & hundreds of phone calls, @EGYPTAIR will no longer be transporting monkeys to laboratories 💥 pic.twitter.com/aTtrvyCE0w

An esteemed Cairo-based surgeon sent a letter on behalf of PETA U.S. to the airline, imploring the company to ‘show that Egypt is on the side of conservation and compassion’. Online ads were also run, along with coordinated communications to Egyptair’s pilots, flight attendants, and cargo employees.

Most recently, PETA e-mailed the airline’s officials to inform them that the International Union for Conservation of Nature – the world’s most comprehensive information source on the global conservation status of animals – had upped the classification of long-tailed macaques from ‘vulnerable’ to ‘endangered’.

The company was told that by participating in the international monkey trade, it was unwittingly driving this species of monkey toward extinction.