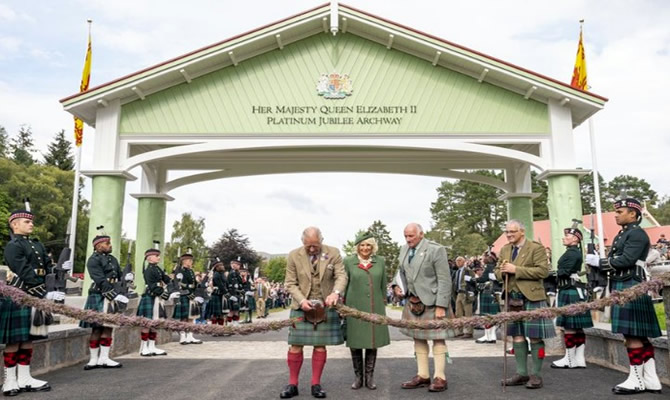 In the Queen’s absence, Prince Charles – the Duke of Rothesay – declared the Highland games open in Braemar.

Prince Charles officially declared the Highland Games open today, Saturday, September 3. In his capacity as the Duke of Rothesay in Scotland, Charles stood in for the Queen in Braemar amid her ongoing health and mobility issues.

Charles was accompanied this afternoon by Camilla, along with Princess Anne and her husband Timothy Laurence. As a part of the ceremony, Charles cut the heather rope and also opened The Queen Elizabeth Platinum Jubilee Archway. They then took their place in the Royal Pavilion where they will remain throughout the day and present awards.

I’m at the Highland Games in Braemar where Prince Charles (or Duke of Rothesay in Scotland) stood in for the Queen to cut the ‘heather rope" to officially open The Queen Elizabeth Platinum Jubilee Archway pic.twitter.com/5G9VhLL478

This is the first time in her 70-year reign that the monarch has missed the Highland Games event. Her Majesty had reportedly been ‘carefully considering’ attending today’s ceremony, depending on how she felt. “The decision has been made for The Queen’s comfort”, a royal source commented.

Due to the 96-year-old’s health worries, the Queen will receive Boris Johnson at Balmoral Castle next week. She had been scheduled to make a trip to bid farewell to the outgoing PM but it was announced that Mr Johnson will instead travel to Scotland.

A spokesperson for Buckingham Palace said that following the Queen’s meeting with Boris Johnson, she will subsequently hold an audience with the new Prime Minister of Great Britain.

To allow the Queen to watch the event online, the Highland Games are being live-streamed for the first time in their history. This year’s event is the first one since the start of the pandemic. “We are passionate about our traditions, heritage, and history, and we are excited that we can reach new and old audiences to share those with you”, declared the organisers.

WATCH: People from across the globe have attended the Braemar Gathering – the popular Highland Games event. pic.twitter.com/RKRiw35HFK