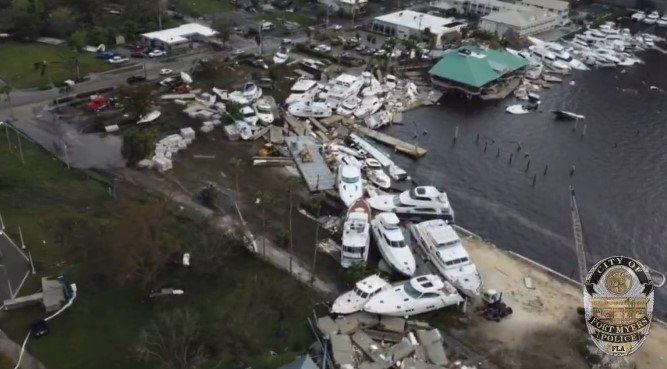 The confirmed death toll from Hurricane Ian has risen to a total of 52 people.

The death toll from Hurricane Ian has risen this evening, Saturday, October 1, to a total of 52 people. As the numbers come to light, criticism surrounds the late decision made by the authorities in Lee County, Florida, to evacuate the public.

Fort Myers, located in Lee County, bore the brunt of the epicentre of the horrendous storm, where Sheriff Carmine Marceno confirmed tonight that 35 people died in the awful devastation. Officials in the Florida county claimed to the New York Times that they delayed issuing evacuation orders because they believed the hurricane would pass further to the north.

“Today, we’ve had over 600 to 700 rescues of people that are in need. During this difficult time, we’re at about 35 deaths, unfortunately. It’s with a heavy heart that I say that number”, said Sheriff Marceno. “Last night I just sat there by myself thinking about the devastation, looking through pictures, and I’ll tell you it brought tears to my eyes. We are going to work harder and we are going to be stronger than ever”.

The eventual order to evacuate in Lee County was issued on the morning of Tuesday, September 27, almost 24 hours later than in some of the neighbouring counties where people were told to leave on Monday 26. This eventual late notice came less than one day before the storm made landfall, as reported by dailymail.co.uk.

Today, Sheriff Marceno briefed state leaders & toured more areas damaged by Hurricane Ian. We are grateful for their support, and activation of multiple assets to help our county. We will stand by you as we recover from this tragic storm together. pic.twitter.com/cip2t2BJv2

Just remember we are all in this together and we will get through this.

There is still a long road ahead of us and know that all city resources are hard at work to restore our city! pic.twitter.com/eGJfWm6KXh

Further fatalities occurred in the counties of Manatee, Lake, Collier, Charlotte, Volusia, and Sarasota, with the majority the result of drowning. A 68-year-old woman reportedly died after being washed out to sea by a huge wave. Another 22-year-old perished when her ATV rolled over after a road washout, while a 71-year-old man fell from the roof of his home as he was attempting to put up rain shutters.

Finally weakened to a post-tropical cyclone, Ian subsequently beat a path out of Florida into South Carolina. The storm was predicted to continue a path across North Carolina today, reaching south-central Virginia during the afternoon.

Here's the NWS estimates for rainfall accumulation from Ian over the Southeast & Mid-Atlantic. The highest totals are in South Carolina, coastal North Carolina, & Virginia. Most storm reports measure 2-5", with isolated 7+" observations. https://t.co/kSn71F30cU pic.twitter.com/jdUYWjOtG4