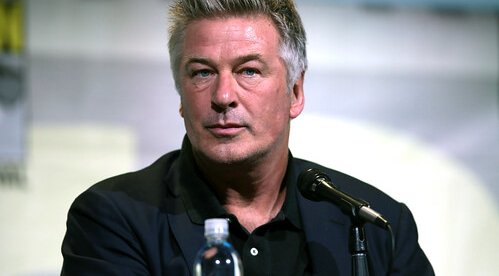 23:10 (October 5) – The New Mexico prosecutor handling the shooting of Halyna Hutchins on the set of Rust, said that the out-of-court settlement with the family had no bearing on the criminal case.

The statement today followed the announcement that the cinematographer’s family had reached a settlement with Baldwin and the produces of the film Rust.

New Mexico First Judicial District Attorney Mary Carmack-Altwie said: “If the facts and evidence warrant criminal charges under New Mexico law then charges will be brought. No one is above the law.”

Inexplicably no charges have been brought some 12 months after the shooting.

19:40 (October 5) – Alec Baldwin has reached an out-of-court settlement with the family of cinematographer Halyna Hutchins, who was fatally shot on the set of the film Rust.

The agreement announced on October 5 will see filming resume in January 2023 with Hutchins’ husband continuing in an executive producer role.

Hutchins died after a prop being used by Baldwin was discharged during rehearsals instantly killing the cinematographer. The gun should have been loaded with blanks as is the norm in the movie industry, however, this time it had live rounds which Baldwin was unaware of.

The cinematographer’s family filed a wrongful death lawsuit against the star and others who worked on the production at the time.

With an agreement reached, Hutchins’ husband said the court case would be dismissed saying: “The filming of Rust, which I will now executive produce, will resume with all the original principal players on board in January 2023,” he said. “I have no interest in engaging in recriminations or attribution of blame (to the producers or Mr Baldwin).

“All of us believe Halyna’s death was a terrible accident. I am grateful that the producers and the entertainment community have come together to pay tribute to Halyna’s final work.”

No further details about the settlement have been released.

Baldwin’s attorney, Luke Nikas of Quinn Emanuel, said: “Throughout this difficult process, everyone has maintained the specific desire to do what is best for Halyna’s son. We are grateful to everyone who contributed to the resolution of this tragic and painful situation.”

Despite a police investigation, no charges have been filed as yet.

13:48 (April 26) – Bodycam footage appears to show Alec Baldwin to be unaware of the extent of Halyna Hutchins shooting, as he seems to be confused with events during the police interview that followed.

A gun held by Baldwin discharged injuring writer director Joel Souza and fatally wounding Hutchins on the set of Rust in October 2021.

Footage of Baldwin’s interview with investigators released this week shows the actor being asked if he believed that somebody would have intentionally placed a bullet into the firearm that he was holding.

He responds saying: “To place a bullet and position a bullet that is a live round, to make sure that that bullet is in the chamber if I were to squeeze the trigger in rehearsal that that bullet came out, someone has to have extraordinary access to that weaponry to do that.

“I can’t imagine somebody walked around with a round and it was a .45 calibre round.”

He referred to speculation on set saying: “Other people on the set were speculating that [if] it was a .45 calibre round she’d be dead. It would have blown a big hole in her.

“So we’re wondering, was the projectile that went into some foreign material stuck and it was an accident with a flash round, and something came out of the barrel, they didn’t check? They always check.”

In the footage Baldwin seems to struggle to understand how what he described as a projectile could through Hutchin’s body and then hit Souza in the shoulder.

“I don’t know any projectile with a gun in a flash prop gun that could accomplish that,” Baldwin said. “Now if somebody put a live round in there accidentally…”

On set firearms and training

Referring to Hannah Gutierrez Reed, who was tasked with overseeing weapons on set and training during part of the production, he said: “See a very important question for Hannah is, have you ever co-mingled live rounds with theatrical rounds in your kit?

“Because they’re forbidden to do that, according to the union rules and the safety rules for all the unions.

“You’re not allowed to do that because of the fear of what will happen if you co-mingle. So whether someone accidentally, and I can’t even imagine deliberately placed a live round in that gun. I’ve never heard that in my life.”

Continuing Baldwin explained the issue of the cold gun, a prop that was not supposed to contain live ammunition saying: “This is a puzzle to me.

“This is making me very emotional now. In my time, and I’m older, but when I was younger and I was shooting guns in films I’ve never seen a theatrical flash round where the material went through someone’s armpit, came out of their body and hit somebody else on the shoulder.

“I’m wondering if your department is prepared to find out what comes out of [Souza’s] shoulder surgically. Is that a live round? Because I don’t think it makes any sense otherwise.

“He (Souza) just told me on the phone. I talked to Joel, and he said, ‘They showed me the X-ray and the shape of the thing in my shoulder is the shape of a bullet.'”

“I’m very upset right now,” the screen star said as the video came to its conclusion.

Charges for the shooting of Hutchins

According to police they have yet to conclude their investigations with information collected still being examined, however New Mexico’s Environment Department’s Occupational Health and Safety Bureau (OHSB) released a report that found the film’s production company had “demonstrated plain indifference to the hazards associated with firearms” and could have “prevented the accident from occurring” if it had acted properly.”

Because the investigation into the shooting of Halyna Hutchins is not yet complete, no charges have been brought against Alec Baldwin or anyone else involved on set or in the provision of props.