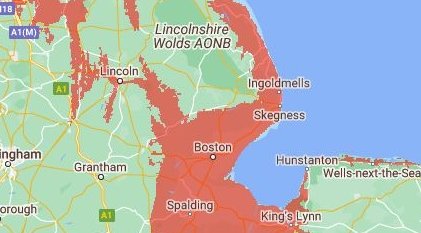 A WORRYING map shows what the UK could look like in 80 years time as climate change threatens to wipe out coastlines around England.

The prediction for 2100 sees entire towns and cities underwater as rising sea levels and other outcomes of climate change continue to progress.

According to Climate Central’s projections for 2100, much of London will be underwater as higher volumes of seawater make their way down the River Thames.

A rise of just 2C could see central parts of the capital turned into a water world, reports the Mirror.

But that’s not the worst of Climate Central’s predictions –  the north and east of England will be hit the worst.

Along the Humber, including Hull, will become completely flooded, with a huge section of the Midlands submerged as far as Peterborough, which is likely to trickle down to Cambridge.

In the north west, seaside areas including Blackpool and Southport will be affected, according to the forecast.

Many other parts of the country could be in trouble also, including England’s South East, with coastal towns in Hampshire, Essex, Sussex, and Kent all at serious risk.

Elsewhere in Europe, Belgium, Germany, Northern France, and half of the Netherlands is expected to be underwater by 2100.

Climate Central is an independent group of scientists and communicators who research and report on how the changing climate affects people’s lives.

They warn that the next century will see a “disastrous impact” if global temperatures increase by 3C, with coastal areas expected to regularly fall below sea level over the next 30 years

This is due to melting ice caps and warmer oceans increasing the water volume.