Christmas came early for “All Aloud”, the Albox-based community choir 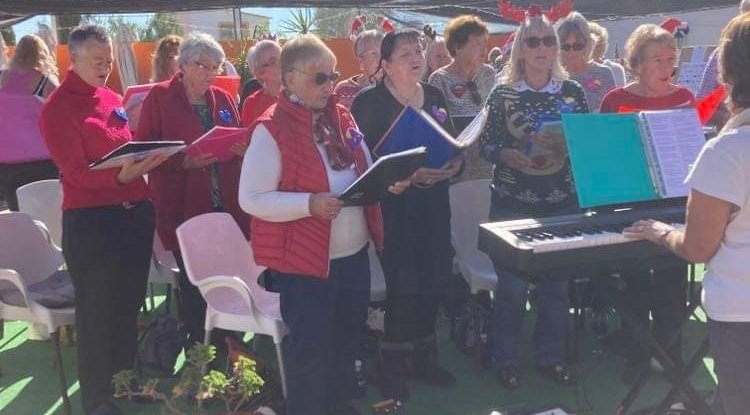 Christmas came early for “All Aloud”, the Albox-based community choir. Image All Aloud.

After reforming early this year the group has gone from strength to strength.

New members have joined the group and numbers have increased steadily as the year progressed. The group’s popularity has led to some requests for the group to perform at charity events throughout the area. Earlier in the year, there was a successful concert at Amigos Market which raised a considerable amount of cash to support refugees affected by the war in Ukraine.

An early start to Christmas came about with the first performance, on Saturday, November 26, where the group performed at two events in support of charitable causes. The first concert took place at Esperanzo’s bar in Urcal in the early afternoon at their Christmas Fair. The group sang a variety of traditional Christmas carols and other seasonal songs.

There was also ample opportunity for the appreciative customers to sing along and join in with the traditional Christmas favourites. Although it did seem a bit strange to be singing about the deep mid-winter and sleigh bells in the blazing Spanish sun.

Later that day, in the early evening, the group performed again at the Arboleas Christmas Fair and again was well received by a sizeable, appreciative audience. There was ample opportunity for audience participation which was taken up with considerable enthusiasm by the large good-natured crowd.

The performances appeared to be well received at both venues.

All Aloud’s next performance is a Charity Concert to be held at Charlotte’s Bar and Grill in Albox on Friday, December 9, at 7:00.PM. The concert, in support of the Almanzora Scouts, is free entry but the Scouts will happily accept any donations,

The bar will be open as normal but there is limited capacity so those wishing to attend should arrive in plenty of time to obtain seats.

All Aloud is a group of people who meet on Tuesday afternoons at 3:00.OM in Charlotte’s Bar and Grill, to sing a variety of types of music. There is no need to be able to read music and there are no auditions. If you sing in the car or the shower then you will be good enough for All Aloud.

After the busy Christmas schedule is completed All Aloud will go back to its usual programme of popular music in the New year.