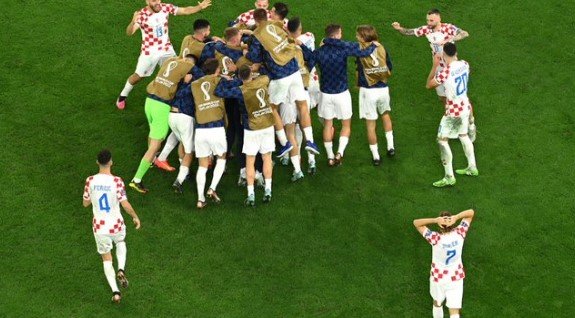 Croatia stunned Brazil with a win on penalties after extra time to progress to the semi-finals of the 2022 Qatar World Cup.

Brazil and Croatia met this afternoon, Friday, December 9, in the Education City Stadium in Ar Rayyan to contest their 2022 Qatar World Cup quarter-final. The Croats lost in the final of the last tournament in Russia so they were definitely a force to be reckoned with.

A very well-organised Croatia side held Brazil’s wealth of talent at bay for the first 45 minutes. In fairness, they looked every inch like a side that wanted to compete on the same level, attacking at every opportunity.

Both teams cancelled each other out in the second half with two sets of midfield players equal to each other and neither allowing their opponents any clear-cut chances.

Going to extra time the game needed a spark of magic from Neymar Jr to turn the volume in the stadium up to fever pitch. The Brazilian had not been at his best it has to be said, but, world-class players only need one chance. With almost the final kick of the first half of extra time, Neymar pounced.

He latched onto a perfect pass that split the Croatian defence and the PSG star swerved around the advancing keeper to fire the ball high into the roof of the net. His strike brought him level on 77 international goals with the legendary Pele in the Fifa-registered list.

Incredibly, with 116 minutes on the clock, Croatia mustered their first shot on goal. That first shot brought them level though with Bruno Petkovic’s stunning strike from the edge of the box taking a deflection to beat Allison.

Penalties it was. Dominik Livakovic was Croatia’s hero against Japan so that must have been on the minds of the Brazilian players as they lined up to try and beat him. Nikola Vlasic smashed the first penalty right into the centre of the Brazil goal in front of the screaming hordes of yellow shirts behind the goal.

Real Madrid’s Rodrygo was first up for Brazil, and, yet again, Livakovic saved his tame effort. Lovro Majer placed the second penalty again into the middle of the Brazil net for 2-0 on penalties. Casemiro placed a perfect shot into the corner for 2-1.

The legendary Luka Modric was never going to miss, sending Alisson the wrong way. Pedro pegged the score back to 3-2, before Orsic made it 4-2. Everything was in the hands of PSG defender Marquinhos, whose effort hit the post and it was all over. The favourites Brazil were out! Why did Neymar not step up to take a penalty?

Croatia now wait to find out if they play Argentina or the Netherlands after tonight’s other match.