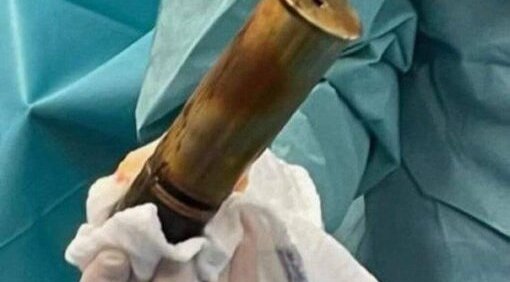 An 88-year-old Frenchman sparked a hospital scare and evacuation after he sought help to remove a WWI bomb from his bum.

Fearing the bomb would explode, doctors called the emergency services who rushed to the Hospital Sainte Musse in Toulon, southern France.

According to the Daily Mail on Wednesday, December 21 the incident happened on Saturday night when doctors were surprised to find the shell firmly lodged in the man’s rectum.

The French news company Var-Matin reported that bomb disposal experts inspected the shell telling doctors there was little chance of it exploding while it was inside the unnamed man.

Apparently, the man had inserted the 20cm long and 5cm wide shell for sexual arousal but then was unable to remove it.

An 88-year-old Frenchman presented at Toulon A&E yesterday with a First World War shell shoved up his arse. Bomb disposal were called to make it safe. The hospital was evacuated. I wish this was a joke. pic.twitter.com/IS2u9kUqBO

A spokesperson for Hospital Sainte Musse said: “An emergency occurred from 9 pm to 11.30 pm on Saturday that required the intervention of bomb disposal personnel, the evacuation of adult and paediatric emergencies as well as the diversion of incoming emergencies.

“We had to manage the risk in a reactive framework. When in doubt, we took all the precautions.”

The medical staff were concerned that any attempt to remove the item could cause it to explode potentially killing or maiming him and those involved in the removal.

Removing the item meant making an incision in the nether regions, removal of the shell and then stitching the incision. It is understood that he is recovering and is in good health.