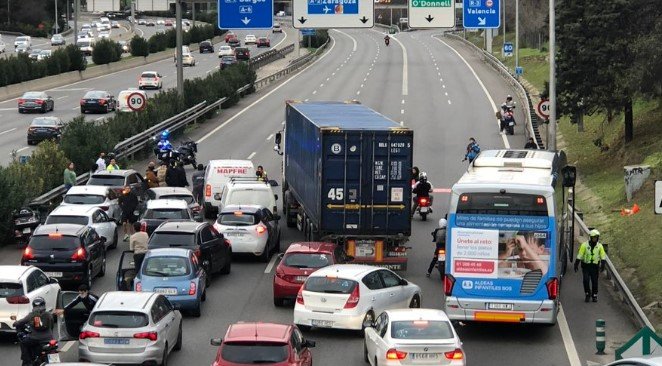 Image of the chaos caused by Futuro Vegetal on the M-30 in Madrid. Credit: [email protected]

Members of the ‘Futuro Vegetal’ activists group glued themselves to Madrid’s M-30 motorway outside the capital causing total chaos for drivers embarking on Operation Exit.

A group of ten climate activists stuck themselves to Madrid’s M-30 today, Saturday, December 23. This is the main road that serves Madrid and is the way in and out of the capital. Their objective was allegedly to block Operation Christmas Exit, calling for an “end to subsidies” to the meat industry.

These ‘ecolojetas’ belong to ‘Futuro Vegetal’, the same group that attached itself to Goya’s Las Majas painting last November at the Prado Museum. The group issued a statement justifying its invasion of the five lanes of the road with banners which read: “Attention construction sites: we are building a better world”.

A post on its Twitter profile said: “We are cutting the M30 in the middle of the Christmas outing operation. We are not going to stop until the Spanish state stops subsidising the meat industry. We are sorry for the inconvenience but our lives depend on it”.

The collective, which cares little about thousands of Spaniards being able to join their loved ones this Christmas, organised a veritable pandemonium on the main roads of Madrid. This was done they said, to “invest subsidies in redistributing production to the local level, generating jobs in the countryside, and promoting food sovereignty”.

“We cannot depend on the will of corporations or the inaction of governments, we need to be the change. It is a matter of life or death”, they stressed, as reported by eldiario.com.