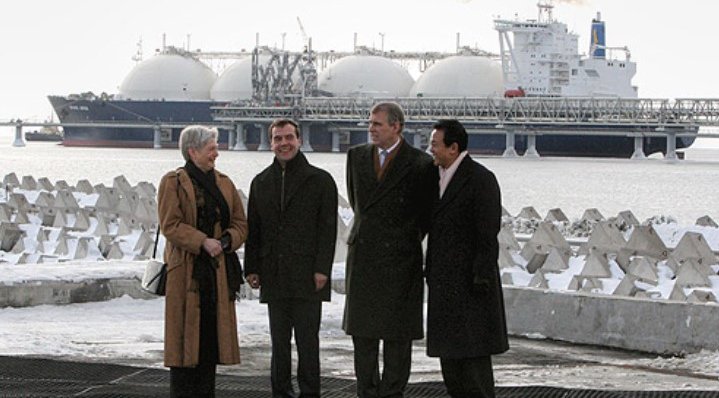 Image of Russian ans Western officials at the sakhalin-II project circa 2009. Credit: Wikipedia - By Kremlin.ru, CC BY 4.0, https://commons.wikimedia.org/w/index.php?curid=6285398

The world’s largest manufacturer of containers for the transportation of liquefied natural LNG has suspended its contracts in Russia due to sanctions on Moscow.

The French engineering company that manufactures containers for the transportation of liquefied natural gas (LNG), on Monday, January 2, announced the suspension of work in Russia. Gaztransport & Technigaz (GTT), is the world’s leading specialist in this field.

As stated on the GTT website, the company also terminated cooperation with the Russian shipbuilding company Zvezda under a contract for the construction of 15 icebreaking gas carriers. Their decision was made due to the restrictions provided for by the eighth and ninth packages of EU sanctions placed on Moscow it said.

“From January 8, 2023, the contract with Zvezda will be suspended. GTT intervention on the two most modern LNG carriers will be limited to ensuring project safety and technology integrity in accordance with current international sanctions”, a message on the company’s website stated, as reported by kommersant.ru.

GTT is a world leader in the production of membrane container systems that are used to transport and store liquefied natural gas. The containers produced by the company are necessary for the safe storage of fuel in large volumes at temperatures up to -163 C.

In March 2022, the Financial Times reported that Russia’s gas projects in the Arctic could be in jeopardy due to the decision of foreign manufacturers of gas containers to stop cooperation with Russian companies amid sanctions. According to the publication, the departure of GTT would probably affect the projects in the Arctic most of all.

Russia’s Arctic projects now include Yamal LNG in northwestern Siberia, which accounted for 5 per cent of global LNG exports in 2020. Arctic LNG-2 is worth about $23 billion – feedstock exports under this project are due to start in 2023 – along with  Sakhalin-2.