‘Illegal’ eviction for the unhappy Gnome 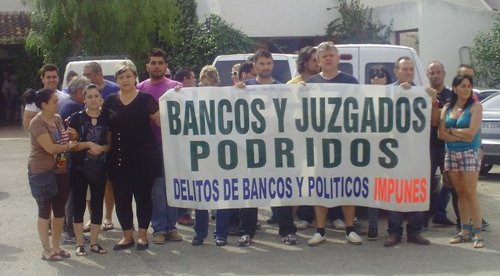 SOLIDARITY: Owner Ausra Klikunaite (left of the banner) with family, friends, and customers.

A BRITISH woman and her employers were evicted from their home and business on Tuesday because the previous owner of their restaurant, owes the bank money.

At about 10.30am, the bailiffs arrived at the Gnomo Feliz II restaurant (Happy Gnome, GFII), Vera Playa.

They were greeted by about 40 friends, family and customers. Heather Gaskin, 24, who has worked at the GFII for three years, told the EWN that on February 23, bailiffs, a Santander Bank employee and several Guardia Civil officers also turned up at the restaurant in Vera without warning.

She said that they had all been completely taken aback by the event.

Gaskin and her employers, Manuel Jimenez and Ausra Klikunaite, said that the bailiff had told them on February 23 that they had 20 minutes to leave the restaurant and adjoining homes. “It’s ridiculous,” said Jimenez, “they just showed up out of the blue and told us we had to get out.

We couldn’t just go and leave all the animals and belongings behind.” They have been living here for three years and have a horse and many other pets.

They refused to be evicted and the officials left.

A Spanish daily newspaper reporter told the EWN that the former owner (Promotora Ingofersa) had been reported recently as having sold a piece of land that he didn’t own.

On Tuesday (May 15) Jimenez and Klikunaite again refused to leave at first.

Their supporters held signs and banners at the front of the restaurant, protesting against illegal evictions. They had banners because the owner (Manuel) had been tipped off that something would occur on Tuesday.

A close friend and neighbour of the couple said that the bank must have found a buyer for the property because the whole legal process has been much faster than usual.

The owners had removed doors and gates from the restaurant and their home beforehand, so the officials weren’t able to lock the property up.

At about 12pm, the Guardia civil began asking customers and friends to leave, telling people that would have to handcuff them and lead them out if they didn’t agree to go.

Then, following police orders, Gaskin and her employees started removing their belongings from the property.

At the time of going to print the eviction was still taking place.

Jimenez’ daughter said that the whole thing was terrible. She said that her father had spent all his money on the business and was about to become homeless.

The restaurant owners said that they have a contract, valid until 2026 and have paid all their rent in advance.

On April 2, Jimenez and Klikunaite went to the court in Vera with their lawyer to present paperwork.

Their documents prove that the GFII has been in business for three years and has a 15 year rental contract.

“The judge told us to hurry up, saying she had a doctor’s appointment,” said Jimenez, “She also told us not to bother getting out the papers because she wasn’t even going to look at them.” The GFII has since filed a lawsuit against the Santander Bank and are waiting for a court date to come through.

Jimenez said he has gone to the courtroom almost every day since the end of February to try and get the officials to look a the GFII’s documents.

Jimenez and Klikunaite had previously told the EWN that their lawyer said they cannot be evicted because their contract is legally binding, all their licences are valid, and taxes paid. They said they weren’t told that the bank had repossessed the property.

It wasn’t until after the eviction attempt in February 2012 that they discovered it had been put up for public auction in November 2010.

The GFII owners didn’t receive eviction notice. “None of this is our fault,” said Klikunaite, “The bank should have let us know earlier and sorted it out.”

Jimenez said that he planned to sleep outside the restaurant for as long as it took to see justice done.